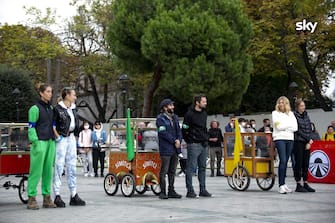 Episode four of the Beijing Express took place entirely in the city of Istanbul. Here travelers face the ultimate immunity test to qualify for the next stop: Uzbekistan.

Watch the video: “Beijing Express: Father and son must leave the race”

The test that travelers have to face consists in carrying 50 Simit, a typical Turkish bread, on their heads.

Only those who manage to keep a tray of Simit on their heads and sell more bread to the Turks for three lire will pass the test.

Beijing Express 2022, what happened during the third episode. PHOTO

Beijing Express, towards the third stage with Enzo Miccio and Max Giusti

Helena and Natasha also stand out in the next stage of the test. Their speed is amazing.

Beijing Express 2022, what happened during the second episode. PHOTO

After the Simit balance test, Natasha moves on to the second phase of the test, the sale of the Simit.

Beijing Express 2022, the great debut and the eliminated couple. VIDEO

At the end of the trial, Mom and daughter sold everything by selling out and earning only 126 lire. Italy Brazil have sold less but at fair prices. Despite this, they still win the test: Mom and daughter.

Beijing Express 2022, what happened during the first episode. PHOTO

The Mom and Daughter couple fly directly to Uzbekistan enjoying the coveted bonus, a wonderful cruise

Beijing Express: the assembly of the Tesbih

It starts with the Scientists. Couples must find clues from the vendors of Dondurma, the traditional Turkish ice cream, and solve a puzzle related to Agatha Christie at the Sirkeci Station inaugurated in 1890 as the terminus of the Orient Express.

After the test, the couples look for accommodation for the night in the lively district of Beşiktaş.

In the morning the race takes them to visit a spectacular Hamman, an experience that cannot be missed in the Turkish capital.

After the Turkish bath, travelers leave for a new challenge that sees them arrive at the station.

The soap opera mission turns out to be a success for everyone.

At the end of the fourth stage of the Beijing Express, travelers say goodbye to Turkey to face new challenges in Uzbekistan. The ranking is clear: Italy and Brazil win

The father and son couple say goodbye to the competitors and officially leave the race.