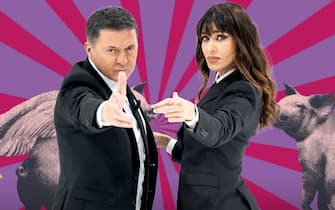 From Wednesday 9 February Belen Rodriguez begins her adventure as host of Le Iene, alongside Teo Mammuccari

WATCH THE VIDEO: Belen Rodriguez, all her collaborations

“I thank Davide Parenti who also chose me to let everyone know who Maria Belèn is. I am very grateful to Mediaset for this new opportunity “said Belen Rodriguez about the running of Le Iene

Belen Rodriguez confirms the breakup with Antonino Spinalbese on Instagram

Belen Rodriguez began her career as a model in Argentina and then in Milan, where she moved in 2004

The television popularity comes in 2008 when it participates in the sixth edition of The island of the famous, ranking in second place

Belen Rodriguez, Punta Bianca nature reserve thanks to its appeal

In 2009 he presented the eleventh edition of Scherzi a parte together with Claudio Amendola and Teo Mammucari and, with Mammucari, Sarabanda

In 2011 he co-hosted the 2011 Sanremo Festival together with Gianni Morandi and Elisabetta Canalis. At the Sanremo Festival she will also participate the following year in replacement of the valley Ivana Mrázová

He later leads, among others, Colorado and the third edition of Italia’s Got Talent

In 2019 he leads Colorado again, together with Paolo Ruffini, Gianluca Fubelli and the PanPers

Belen Rodriguez comes out of the hospital, the sweet meeting between Santiago and Luna Marì

Belen Rodriguez also worked as an actress. Among others, she starred in the 2011 film If you’re so I tell you yes by Eugenio Cappuccio and in the 2015 film No 2 Without You, by Massimo Cappelli

Belen Rodriguez is also a stylist and entrepreneur. With her sister Cecilia, for example, she designed swimwear for her own brand Me Fui