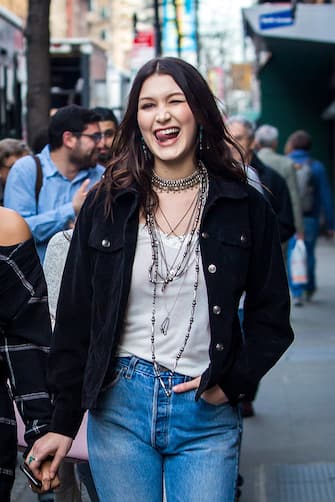 Bella Hadid on the streets of the West Village in New York during a photo break, in the photo the supermodel is 19 years old, at the beginning of her successful career. Her career is also marked by some mental disorders caused by Lyme disease which she suffers and which she talked about sharing her insecurity about her with fans. In the recent interview with Vogue, you also spoke of the use of cosmetic surgery at the age of 14. Choice she regrets today.

Bella Hadid, from Lyme disease to anxiety and depression: the model’s confession

Find out in the gallery how Bella Hadid has changed, from the dream of becoming a rider to aesthetic retouching, the supermodel is today among the highest paid on the world fashion scene

Bella Hadid, before and after: how the model has changed over the years

In 2014 Bella moved to New York to study photography at the Parsons School of Design, which she left shortly after to pursue a career as a model.

His path is marked: in August 2014 he signs a contract with the agency IMG Models, leaving the photography school, and makes his debut in the month following the New York fashion week by modeling for Desigual.

From that moment on he began to show for the biggest fashion brands, Tom Ford, Diane von Fürstenberg, Tommy Hilfiger, Moschino, Balmain, and Marc Jacobs, in London for Topshop Unique, Burberry and Giles and in Milan for Philipp Plein, Moschino, Missoni , and Bottega Veneta, to name the first names for which he works.

In 2015 she debuted with Chanel, and throughout her career she has appeared on the cover of many fashion magazines such as Harper’s Bazaar, Elle, Allure, Glamor and W.

Elected model of the year by the Daily Front Rows Fashion Los Angeles Awards in 2016, she took part in the Marc Jacobs campaign alongside Adriana Lima and in Versace’s campaign with Rosie Huntington-Whiteley and Stella Maxwell. She becomes the face of Dior’s Beauty line and is on the cover of Vogue Paris alongside model Taylor Marie Hill. In November of the same year she paraded for the first time on the Victoria’s Secret Fahion Show.

In 2017 she is the protagonist of the advertising campaigns of Moschino and Fendi, alongside her sister Gigi Hadid, she is chosen as the ambassador of the Bulgari brand for the line of accessories. In September, she sets the record for the most magazine covers Vogue in just one month, appearing in Chinese, Arabic, Australian, Spanish and Brazilian editions

In November 2017 she entered for the first time in the ranking of the highest paid models, drawn up by the magazine Forbes, ranking ninth with a gain of $ 6 million. But her rise is unstoppable, despite the fact that she gradually confesses her personal problems, from insecurities, to sinkholes, to disorders caused by Lyme syndrome that forces Bella to abandon the dream of becoming a horseman.

Unlike Gigi Hadid (who seems to be completely natural), Bella has repeatedly resorted to the cosmetic surgeon, and talks about this choice in the recent interview with Vogue USA.