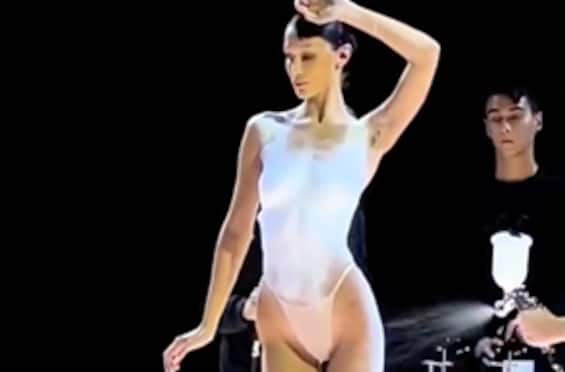 Bella Hadid she appeared on the catwalk with only one thong and was dressed on the spot in front of everyone. To “cover” it, the stylists did not resort to fabrics, needle and thread, but to a simple spray that, in contact with the skin, was transformed into a dress that was then cut and shaped and finished with scissors. It was created by the Coperni brand.

In short, in Paris, fashion and science together gave birth to a moment of magic. To give the most iconic performance of this fashion week, running in the French capital until Tuesday 4 October, was the brand Coverwho closed her show by literally sprinkling a dress on the body of Bella Hadid. As shown by the numerous videos that went viral on the web, the American supermodel, who initially entered semi-naked on the catwalk, was reached on a platform by two technicians who, using spray guns, designed a long white dress on her. – immediately after the stylistic adjustments of an assistant – Hadid paraded under the incredulous eyes of the spectators and the cameras. Not a simple painting, but a real dress. To make it possible, the intuition of the founders of the fashion house, Sébastien Meyer and Arnaud Vaillant, is the innovative product of the company Fabrican Ltd, an instant liquid spray composed of cotton fibers and synthetic materials integrated in a polymer solution. From a technical point of view, once adhered to the person’s body, the liquid quickly evaporates, leaving only the fabric on the skin and thus giving life to a garment. It took six months of work to prepare the performance. “We won’t make any money from this, but it was a wonderful moment, an experience that will have aroused emotions”, Meyer explained to Vogue Business. Many in the industry have pointed out the similarity to an experiment by designer Alexander McQueen dated 1999. In her groundbreaking spring / summer show that year, model Shalom Harlow showed up in the center of the room in a white dress then painted with paint by two robots equipped with spray guns.