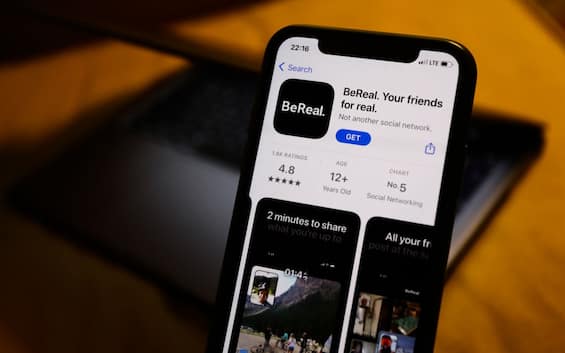 No filters, no likes, no followers. A notification that alerts you when you need to take a selfie, whatever you are doing and whatever your physical condition. From that moment you have two minutes to publish the shot. This is how BeReal works, the app that is depopulating on Generation Z smartphones and that wants to capture snapshots in real time and without tricks. “Your friends, really” is the slogan of the platform that wants to oppose the cult of beauty and perfection that prevails on traditional social networks.

The social was launched in France two years ago by creators Alexis Barreyat and Kévin Perreau, but to gain popularity it had to wait until 2022: downloads increased a few months ago. There is already talk of several million people conquered by the format and in particular about 3 million users who make daily use of the app. In August alone, 7 million new profiles landed on BeReal. Photos can be shared once a day. Once taken, there is still time and you can decide whether to publish them or to give up. Another function launched is that of double camera photos, which immortalize both the user’s face and the outline, so as not to be able to lie about the location. If you take a selfie sitting on the sofa, you will no longer be able to pretend to be in the living room of a luxury hotel with an ad hoc tag. The platform feed is full of scenes from everyday life: photos in pajamas or full mouths, bathroom tiles as the background and faces definitely not on the cover.

The desire for authenticity, of which BeReal interprets itself, had already made itself felt with particular trends that had depopulated on IG. From skin positivity influencers who post photos showing enlarged pores and pimples, defending the right to have non-smooth skin and still feel at ease, to mothers who show the true face of pregnancy and motherhood without hiding stretch marks, depression and a sense of inadequacy. BeReal has intercepted these phenomena that were already galloping on other platforms, revolutionizing the way of producing content and in particular of conceiving photography. No more glossy portraits, but images that are as realistic as possible. The way of relating to others also changes: it is not enough to click on the raised thumb. On BeReal you can interact with personalized “reactions”, the so-called RealMoji, that is the emoticons with our face. There are not even the classic counters that report the number of likes received. After 50 friends, you will read a generic +50. It is above all the young people of Generation Z who are intrigued by this new way of sharing content and communicating.

BeReal developer Alessandro Paluzzi announced that IG was also studying similar functions, such as double cameras and instant photos. And so it was: the “bilateral” tool appeared on the social network. Even if the Zuckerberg platform defends itself by claiming that it has been working on this front for several years, it would not be new for IG to borrow particularly lucky ideas from other social networks: it has already happened with the Reels that wink at Tik Tok and with the self-destructing stories after 24 hours on Snapchat.