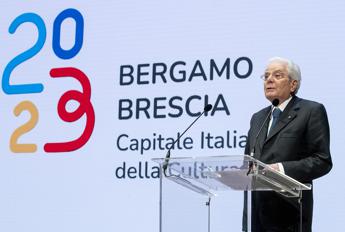 The head of state at the inauguration ceremony: “This city is an example of the ability to overcome adversity”

Bergamo-Brescia Italian capital of culture 2023. The opening ceremony took place in the presence of the President of the Republic, Sergio Mattarella, who recalled how these two cities are “an example with their civic virtues of yesterday and today. A city hard affected by the first wave of the Covid pandemic, when an aggressive and unknown virus claimed thousands of victims in our country, and they knew how to react, giving life, and feeding with their values, that model of solidarity which made it possible to face the crisis”.

“In the past year we have experienced the relief of the restart. Economic activities, social expressions, daily life have resumed more usual rhythms. Bergamo and Brescia, however, had not stopped -explained the head of state-. Innovate , looking to the future, trusting in man’s ability to know how to overcome adversity, have given life to a concrete path which today finds further sanction with the start of a year which sees them as the Capital of Culture”.

According to Mattarella “the progress of our history has shown how much the weight and value of culture have become decisive for the progress of our people”. “Culture is closely connected with freedom: study, research, expression of one’s thoughts. Our Constitution reminds us of this – once again. Art and science are free, according to article 33; while article 21 establishes the right to freely express one’s thoughts -explained the head of state-. The exercise that Brescia and Bergamo, the capital of culture, are preparing to undertake is, therefore, a great exercise of freedom, which the whole country will look forward to”.

“The wish I address to Bergamo and Brescia, the capital, and their citizens, is to be protagonists of a new dialogue that looks at the whole of Italy and Europe”, added Mattarella, recalling that “we are reliving the tragedy of war in Europe, which we hoped would be placed forever in the archives of history after the horrors we then knew. And it is precisely placing the integral dignity of the person at the center of every action that leads us to be on the side of those who are attacked and fight for their independence and freedom”.

“We are aware that in building a just peace, culture, in its universal dimension, is called to play a role, in bridging gaps, in rebuilding respect and coexistence, in uniting men”, explained the head of state. “It is a matter of making the most of the ” amassing reserves against the winter of the spirit “, according to the definition that Marguerite Yourcenar dedicated to the ” warehouses of culture “, to museums, art galleries, libraries “, Mattarella said again .