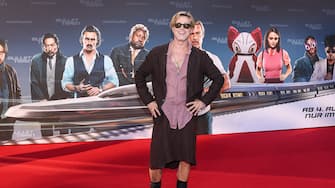 Brad Pitt on the Berlin red carpet, for the presentation of his latest film Bullet Train she amazed everyone by wearing a skirt. In the week of record heat that is igniting all of Europe, the sex symbol actor has opted for the most … fresh solution. The actor paired the skirt with a linen jacket and a pair of combat boots

Bullet Train, a new trailer for the film with Brad Pitt

Brad Pitt on the Berlin red carpet of the film Bullet Train. Directed by David Leitch, the film is the film adaptation of the 2010 novel The seven killers of the Shinkansen written by Kōtarō Isaka

Brad Pitt along with Aaron Taylor-Johnson and Brian Tyree Henry

In Bullet TrainBrad Pitt plays the character of Ladybug, an unfortunate paid killer