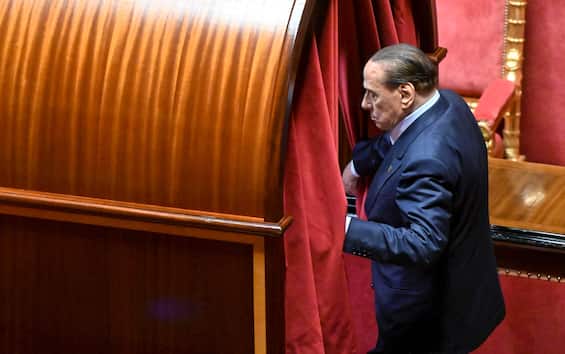 The Forza Italia leader made it known that the negotiation on the composition of the new government “is over” and the senator will not be entitled to any dicastery, which “is not good because vetoes must not be given”. Forza Italia was absent from the vote that proclaimed Ignazio La Russa president, and the former prime minister – the only one to vote together with Casellati – explained: “We wanted to give a signal that vetoes should not be given to people. We had made the calculations that everyone would have voted him the same “

Silvio Berlusconi returned to the Senate after nine years, in a day full of tensions with the election of the president of Palazzo Madama which divided the center-right. The leader of Forza Italia, after the vote, speaking to Corriere.it says that the legislature does not start badly, “the normal part”, but when asked how the negotiations on the composition of the new government are proceeding, he replies: “It’s over”. For days there have been rumors about a confrontation on the figure of Licia Ronzulli, for whom Berlusconi would have wanted a ministry, but to a specific question today the leader of FI replies: “No ministry to Ronzulli, and that’s not good because you don’t have to give veti ”(TOWARDS THE NEW GOVERNMENT: LIVE UPDATES).

The vote on La Russa

In the Senate, Ignazio La Russa was elected president at the first vote. Forza Italia was absent: only Berlusconi and Elisabetta Casellati voted for the Azzurri. I am “pleased” with today’s vote “we had done the calculations that everyone would have voted the same. We wanted to give a signal that vetoes should not be given to people, vetoes are unacceptable ”, says the leader of FI to Corriere.it leaving Palazzo Madama. And to those who ask him who in his opinion voted for La Russa – elected even with votes coming outside the perimeter of the center-right – he replied “the Third Pole and the senators for life”.

“In Forza Italia, discomfort over vetoes”

“Sincere wishes to the new President of the Senate Ignazio La Russa. Forza Italia wanted to give a signal of openness and collaboration with the vote of President Berlusconi – then reads a note – But in a meeting of the Forza Italia group in the Senate, a strong unease emerged over the vetoes expressed in recent days in reference to the formation of the government. We hope that these vetoes will be overcome, giving way to a loyal and effective collaboration with the other forces of the majority, to quickly restore government to the country ”.

The exchange with La Russa in the Senate

During the day there was also a lot of discussion about an interview, filmed by cameras, between Berlusconi and La Russa, which took place during the vote at Palazzo Madama. From the video images the exchange seems to be on, with the leader of Forza Italia who at a certain point bangs his fists on the table and says a word that from the lip looks like a “vaffa …”, but which is not even clear to whom it would have been addressed. After the vote, however, on Twitter, Berlusconi wrote: “I am happy for the election of Ignazio La Russa as president of the Senate of the Republic. Not only have I never had any clashes with him, but we are collaborating loyally and in full agreement to give our country a stable institutional set-up and a strong and cohesive government ”.