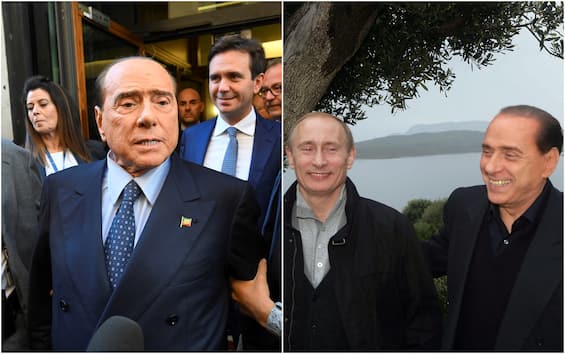 The former premier in a meeting with the deputies of Fi: “I have reconnected a bit with the president, in the sense that for my birthday he sent me twenty bottles of vodka and a very sweet letter. I answered him with bottles of Lambrusco and an equally sweet letter ”. The phrases reproduced in an audio broadcast by LaPresse. The blue leader then denies: “I told a story”. He was referring to 2008, the Forza Italia coordinator specified

Silvio Berlusconi’s words about Vladimir Putin become a coincidence. The leader of Forza Italia, in the meeting with the Italian deputies, said: “I re-established relations with President Putin a bit, a bit much, in the sense that for my birthday he sent me twenty bottles of vodka and a very sweet letter “. These phrases were recorded and then released in an audio published on the LaPresse website. Berlusconi and his later denied. Re-established relations with Putin? “No, I told a story,” said the former premier as he left the Chamber. He was referring to many years ago, instead specified the coordinator of Fi Antonio Tajani (TOWARDS THE NEW GOVERNMENT: LIVE UPDATES – THE SPECIAL).

In the audio released by LaPresse, Berlusconi can be heard saying: “Russian ministers have said on several occasions that we are already at war with them because we provide arms and financing to Ukraine. I personally cannot express my opinion, because if it is then told by the press it will result in a disaster, but I am very, very, very worried ”. And then again: “I re-established my relationship with President Putin a bit, a bit much, in the sense that for my birthday (September 29, ed) he sent me twenty bottles of vodka and a very sweet letter. I replied with bottles of Lambrusco and an equally sweet letter. I was declared by him the first of his five true friends ”. Berlusconi’s story took place in Montecitorio, during the meeting of Forza Italia deputies. He would also have made some considerations – which are not heard in the audio – on the hypothesis of Ukraine’s entry into NATO: a hypothesis, he would have said, that if it were to materialize it could mean “world war”.

In the following hours, even before the broadcast of the audio, the entourage of the former premier denied the reconstruction according to which Berlusconi may have re-established relations with the leader of Moscow. Leaving Montecitorio, to those who asked him if he has reconnected relations with Putin, Berlusconi himself replied: “No, I told a story …”. The close collaborators then again denied the interpretation that accredits the “alleged resumption” of relations, explaining that the blue leader told the parliamentarians an old story relating to an episode dating back to many years ago. A version also credited by Antonio Tajani: “Putin’s bottles as a gift to Berlusconi for his birthday? Old stuff, stuff from 2008”, the coordinator of Fi cut short. public, and I would like to ask myself about who lets them out, in the end I am convinced that there is no skid “by Silvio Berlusconi on Putin, said the new president of the Senate Ignazio La Russa, guest of” Porta a Porta “instead. .

Many reactions on the Berlusconi-Putin case. “It is questionable whether Weber can still sincerely believe that the EPP can support this coalition and this government. This is an unprecedented drift and an affront to Italy and our Union. It is time for the EPP to stop daydreaming, look at the facts and return to the pro-European path, with those who defend Europe and its values ​​”, said the president of the Socialists & Democrats group, Iratxe Garcia Perez, commenting on the words of Berlusconi on relations with Putin. “The EPP continues to tell us that Forza Italia will be the guarantor of a pro-European government firmly anchored to European values ​​and Atlanticism. While Berlusconi himself is proud to tell his newly elected parliamentarians that he has managed to resume his relationship with Putin and prides himself on being the first of Putin’s five closest friends, “said the president of the S&C group. d.