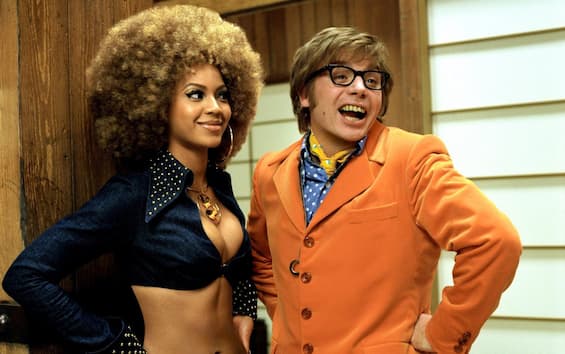 The US magazine Vulture celebrated the 20th anniversary of the film Austin Powers in Goldmember with a choral interview with many professionals who participated in the film.
Among the various stories that emerged, one of the most interesting revelations is the one offered by the film’s make-up artist, Kate Biscoe.
The make-up artist revealed that pop star Beyoncé (who was on her film debut) complained about her look retouching on one of the movie’s posters, asking for it to be changed. “Too thin, it’s not me,” Beyoncé would have said, requesting a correction of the poster.

In the hit comedy (third act of the Austin Powers franchise, the bungling spy who prays to 007. It was the seventh highest-grossing film of 2002, thus a very successful) the then solo singer played the role of Foxxy Cleopatra. Beyoncé felt her poster made her too skinny, so the marketing team had to redo the poster.

“When we were shooting, someone brought her a poster that would promote the film,” makeup artist Biscoe revealed to Matthew Jacobs, a reporter for the film. Vulture. “He showed him. ‘Do you like it?’ And she was like, ‘Yeah.’ He says, ‘What’s going on?’ And she says, ‘You made me too thin. It’s not me.’ Then she made an hourglass shape. And he said, ‘Okay, we’ll fix it.’

The makeup artist added: “She walked away to do the scene, and I watched [l’addetto del marketing] and I smiled at him. Like: ‘Is this the first time an actress has asked you to enlarge her body?’ And he: ‘Yes. She will cost me thousands of dollars, but I will. ‘”

The manufacturer of Austin Powers in GoldmemberJohn Lyons, revealed that Beyoncé had to go through a “really tough physical regime and diet” to get fit for the film, as Zack Sharf reports on Variety.

The singer had to stick to a 1,200-calorie-a-day diet to play the role of Foxxy.
“[Il team di Beyoncé era] deeply aware of the expectations that both the music world and Hollywood often have about how young and beautiful women should look and were intent on making these ideas work for their own ends, ”added Lyons.

On the first day Beyoncé showed up on the film set, head of hair stylists Candy Walken said the crew was flabbergasted. “We all stood there in disbelief, open-mouthed,” he added. “She was 19 and had such mastery of that stage when she stepped onto it. None of us really knew why they had chosen her for this character, and then we get it, ”Candy Walken revealed.

The superstar had the film’s marketing team remake the poster that slendered her curves, reversing the trend that usually winds in Hollywood.
Beyoncé is very fond of her Junoesque, soft and buttery shapes. Even on social networks she does not allow herself to be tempted by “improvement” filters, showing her true silhouette of her.
Beyoncé’s film debut saw her as undercover spy Foxxy Cleopatra. After Austin Powers in GoldmemberBeyoncé has starred in many other films, including Dreamgirls, Cadillac Records And Obsessed. After that she even started directing his concert films.

A passion for cinema

Although she is opposed to photo editing, Beyoncé is not unaware of the effects offered by Final Cut Pro, the film editing program that the artist has learned to use himself.

“I was very interested in cinema and my first project was to direct my concert film I Am … World Tour“, said the pop star in her interview for the cover story of Harper’s Bazaar September 2021. “I learned how to edit on my own using Final Cut Pro, and it was the beginning of a newfound love and creative expression, which led to the creation of the visual album of my self-titled album, Beyoncéthen Lemonade, Homecoming And Black Is King”Added Beyoncé interviewed by Harper’s Bazaar.

After that Beyoncé went on a solo career. Beyoncé Knowles has since become simply Beyoncé.

“With the film came his first solo single (the underestimated jam funk Work It Out) and a bridge to success that defined the image Crazy in Lovegenerally considered his real breakthrough, ”writes Matthew Jacobs on Vulture.

At the time Beyoncé was eager to prove herself as an actress, says Jacobs (noting how the music-cinema crossover was important in the early 2000s, thanks to Mariah Carey.)
Prior to the third installment of the Austin Powers saga, Beyoncé had only acted (and sang) in Carmen: A Hip HoperaMTV’s contemporary version of the French classic opera.
Thanks to his participation, the producer of Goldmember John Lyons has decided to enlist her to play Foxxy.

Beyoncé took on the role of a sexy FBI agent who used to brighten the nights in Austin (Mike Myers) and also those of the regulars of the nightclub where she performed as a singer.
As Beyoncé herself recounted in 2002, she auditioned twice. “I read with Mike […]. When I left, I was convinced that I wasn’t going to get the part, ”she told Newsweek. For her second call she went back to wearing a Pam Grier-like catsuit, an afro wig and she had memorized every blaxploitation movie ever made, she added the diva.