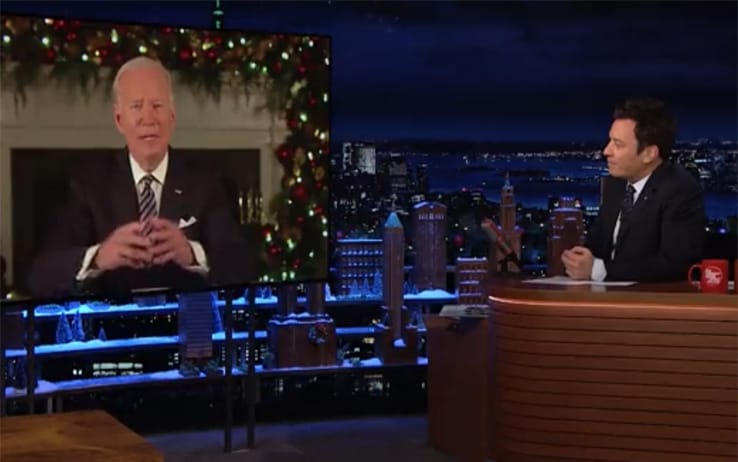 He did not shy away from criticism but raised above all the importance of vaccination. It happened during the “Tonight Show” hosted by comedian Jimmy Fallon on the Nbc television network. The president has chosen one of the most followed and most popular programs on American television to bring his message even to Americans who know little or no they know about its political and economic agenda.

The decline in popularity

The two-segment interview began with Fallon raising the issue of the president’s drop in the polls. “Do you pay attention to the ratings? The comedian asked.” Not anymore, “replied with a smile Biden, connected from his Wilmington, Delaware residence, where he usually goes for the weekends.” 65%, not around 45% “.” I am confident that people will understand – he adds – I will never disappoint the country “.

The head of the White House dropped to 42% approval in late November, the lowest rate in his presidency, with voters primarily concerned about the economic situation and rising inflation. “People are afraid, worried – explains Biden – they are told many inaccurate things. Not about me, but about their situation. He is told that Armageddon is coming. But the truth is that the economy has been growing like never before for 60 years and unemployment is 4.2%. “

Getting vaccinated is patriotic

A separate chapter that of vaccinations. “The way to avoid the virus is to have two vaccinations and then a booster. It is available, we have the antidote and it will make a huge difference – emphasizes the President – If you do not want to take care of yourself too much, think of your children, brothers, sisters, colleagues. They talk about how this only happens in Biden’s tenure, how he is un-American. Instead think this: it is patriotic to get vaccinated, it is not a joke, it is patriotic to do so. “

Life in the White House

But the president also tells of his life in the White House: “Inside you have the distinct feeling that it is not your home, but the home of the people with many people who work there: there are those who tidy up the rooms, those who fold our clothes, and the cooks on the second floor. But we make breakfast ourselves, “he adds. “So you lay the eggs yourself?”, The conductor urges: “No, Jill makes those”, laughs the president, referring to the first lady. “You brought the class back to the White House,” Fallon then concludes.

Biden and the “late-night shows”

Biden was the second incumbent US president to appear on a “late-night show” after Barack Obama, who was Jay Leno’s guest during his first term in the White House in 2009. Biden nevertheless participated in the Tonight Show in 2009. 2016 as vice president eating an ice cream cone live with the comedian.