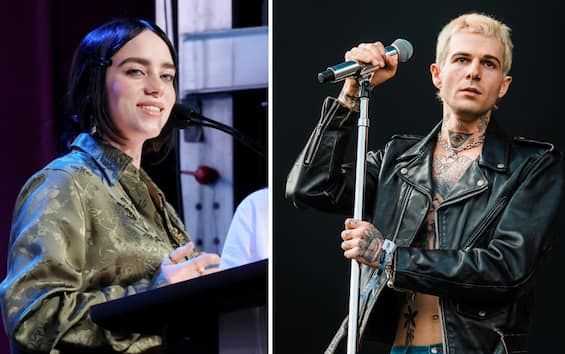 Billie Eilish has formalized her love affair with colleague Jesse Rutherford, American singer, songwriter and actor who is also the frontman of the alternative rock group The Neighborhood.

The 20-year-old pop star posted a series of snapshots from her Halloween weekend on her Instagram profile, including eloquent shots of her boyfriend, 31-year-old Jesse Rutherford.

Eilish wanted to overdo it, offering her followers not only Stories but, if anything, Love Stories… She finally wanted to show off her partner, giving her large audience a taste of her celebrations on October 31st.

In the most eloquent shot of all, Billie Eilish is disguised as a child while the lead singer of the band The Neighborhood wears a senior costume. This couple disguise is a dig at the many commentators who in recent months have expressed themselves about their considerable age difference, assuming that the two were together and that 11 years of age gap were excessive.
The couple, making their relationship official, wanted to mock the bigots who have been tormenting them for weeks with this refrain.

You can watch the series of photos and videos of the Halloween 2022 spent by Billie Eilish and boyfriend in the post you find at the bottom of this article.

The relationship between the two musicians

Billie Eilish’s 106 million followers literally went crazy after the official announcement that their darling wanted to offer them on October 31st.
So much for the “trick or treat”, in short.

The pop star and lead singer of The Neighborhood group began to raise suspicions about an alleged relationship last month when they were spotted kissing in Los Angeles outside the Lal Mirch restaurant.
But this coming out of the closet adds an important formalization to the liaison.
This comes just a week after a TikTok video (posted Oct.15) showed the couple holding hands at Universal Studios’ Halloween Horror Nights.
This is the first time Billie Eilish has publicly offered information about her new partner, however – according to reports. AND! News – she and Jesse Rutherford have been good friends for many years.

Before this new love story, the artist of No Time to Die she had been linked to actor Matthew Tyler Vorce. She was spotted with him during a vacation in Santa Barbara, a romantic getaway that the couple had granted in 2021.
The two then separated in May 2022, with the usual storm of rumors and assumptions from fans. The rumors, especially malicious, have been so many and so poisonous that Matthew Tyler Vorce has written the following statement on social networks: “No one has betrayed anyone. Relationships end. Simple. Creating rumors and LYING on the Internet is dangerous”.

Below we show you the series of photos and videos of the Halloween 2022 spent by Billie Eilish and her boyfriend.