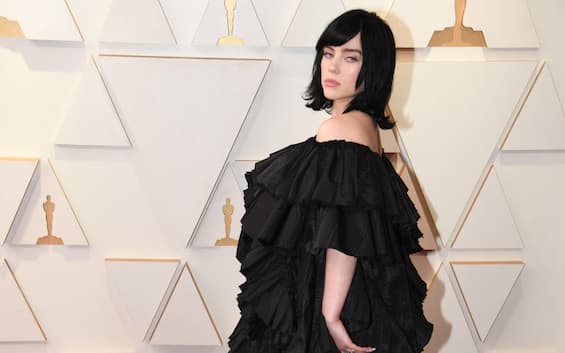 Billie Eilish celebrated her 21st birthday (with a party full of VIPs) just a few days ago and she gave the biggest gift to the fans: the singer announced that on January 27, 2023, in some selected rooms, it will be possible to attend a spectacular revival of his June concerts at the O2 Arena in London. The event was presented as “a seductive visual journey into the heart of the Happier Than Ever, The World Tour” and is the realization of a dream for the young artist, increasingly attracted to the world of cinema.

The liaison between Billie Eilish and the big screen is now full-blown, with the singer who also took home an Oscar last year for her theme from the latest James Bond No Time To Die. Directed by Live at the O2 then we find the same Sam Wrench who, with the pop star, had already created that sort of “musicarello without plot” set in Paris and released last year on Amazon Prime Video (it was part of the project Prime Day Show). For those who don’t remember, it was an authentic proto-film in which the singer let herself be fascinated by a Ville Lumière suspended in an indefinite time, using it as the perfect backdrop for her singing performances. This time Wrench was unable to take advantage of a natural set like Paris for filming but still has top-level instrumentation on her side, starting with 20 full-frame digital cameras with cinematic glass. It was the latter who immortalized the author of Happier Than Ever during a series of unforgettable shows, in which all the highlights of the Los Angeles pop star’s repertoire from Bad Guy to Therefore I Am. A cinematic release was eagerly awaited by fans, who have already been able to see parts of the concerts held in the English capital between 10 and 26 June on Apple Music this fall. Billie Eilish Live at the O2 however, it is not the slavish reproposition of that same material, on the contrary. The film, which will soon be visible in cinemas, will add another half hour of abundant music to the already rich corpus available for streaming, destined to further justify the Grammy nomination in the Best Music Film category for this work.

An event that makes everyone “happier than ever”

The idea of ​​bringing her art to the cinema was a lifelong dream for Eilish, who didn’t hesitate to communicate all her enthusiasm in presenting the work: “I’ve always wanted to make a musical film that captured the energy of a live show, let it be known the voice of Everything I Wanted. “These last 16 months have been special for me as I’m back to travelling, performing live and sharing my experiences with so many amazing people around the world. This film is a live viewing experience and a memory for all of us. Celebrate everything I love about this tour and most importantly everyone who came to see me. This is my thanks.” Surely the news of being able to see all this in a cinema will have been a great Christmas present for the admirers of the Californian singer. An army of fans who now, just like her at the end of that Parisian mini-film, can’t wait to ask for a ticket to the cinema. She maybe with a song in her head that reminds him how much they probably feel in that moment “happier than ever”.