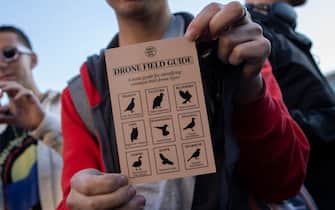 Almost two thousand people gathered a Washington Square, in the center of Manhattan, for the surreal manifestation, which takes the title of their own movement. It is called Birds aren’t realwhich literally means “Birds are not real”

At the base of the protest there would be a theory according to which “birds no longer exist, replaced by drones“. It is a gimmick sarcastic to point the finger at those conspiracies so absurd as to cross the line between fiction and reality

TO Washington Sqaure a great deal has therefore arrived Number of person, with signs and chants rose to protest. Among the many banners it is read: “Pigeons lie“,” Open your eyes: birds no longer exist, replaced by drones “or”Wake up America”

The meaning is to fight, a shots of irony what they define “a loss of boundary, between what is true and what is out of reality. ” To explain it is Peter McIndoe, the student of Memphis who created the movement in 2017when he was 19: “Let’s fight madness with madness” he never tires of repeating

The birth of the movement Birds aren’t real It is surprising. After the arrival of Trump at the White House, there were two demonstrations, one for the pros and one for the cons. McIndoe saw supporters parading, including people with placards full of theories that Barack Obama And Hilary Clinton they raped and ate children. He, then, began with him: “Birds don’t exist”

Obviously, he found someone on the internet who believed him, so he decided to increase the dose: “The birds were exterminated by the CIA in 2001 and replaced by drones to better control us “. The student continued to raise the bar in the hope of making it clear that these were such absurd statements from cannot be truebut people continued to believe him

The demonstration was a success because it is designed in a way perfect and faithful to real protests. As the two thousand paraded through the center of New York, on Twitter, Instagram and TikTok were turning contents in favor of the mock protest. Upon arrival in the square, with a false counter-protest organized to raise the level, gods fake protesters they shouted that “the birds are real”

The phenomenon, among other things, has grown dramatically on social media network – beyond 700 thousand followers between Instagram and TikTok – but not always in the direction hoped. Many users read posts with a smile, someone gets scared and of course others believe it

But the original members of the Bird brigade they all are very youngmostly belong to the Generation Zgrab the dynamics of the web constantly evolving, having fun and never ceasing to provoke

The bird gaffe that Mike Bongiorno never did