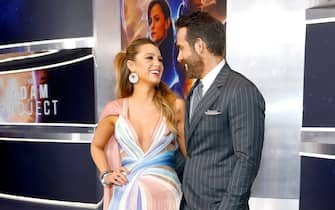 Ryan Reynolds, 45, and Blake Lively, 34, appeared smiling and close-knit at the New York premiere of his latest film. The Adam Project

WATCH THE VIDEO: The Adam Project, the trailer of the film

As for accessories, Blake chose a pair of high-heeled, crystal-studded sandals from Gucci and a range of Lorraine Schwartz designer jewels.

Ryan Reynolds for the occasion chose a gray pinstripe suit instead

The Adam Project, first video clip of the film with Ryan Reynolds

The Adam Project is a film directed by Shawn Levy which stars, in addition to Reynolds, also Zoe Saldana, Mark Ruffalo and Jennifer Garner

Ryan Reynolds: “This is how the story with Blake Lively began”

Ryan Reynolds and Blake Lively met in 2010 on the set of Green Lantern but they were both engaged: he married to Scarlett Johansson, she was dating Leonardo DiCaprio instead.

The Adam Project, the teaser of the film with Ryan Reynolds

“We have been friends for a long time – said the actor some time ago – I think this is the best way to start a story: in friendship”

From the Beginning to Deadpool: Top 10 Ryan Reynolds Movies. PHOTO

“We have always liked each other. We grow together. We learn from each other – the two explained to Entertainment Tonight last October – we don’t take each other too seriously “. In fact, the jokes that the two actors play on each other are famous, even through social media

The best films to see in March 2022 in streaming and in cinemas. PHOTO

“I could never have predicted that anonymous sex in the bathroom at the airport would lead to this – joked the actor, wishing his wife on Mother’s Day in 2021 – Anyway, I’m lucky to reflect a little of the sunlight that you shine on us all. Happy Mother’s Day, my love ”