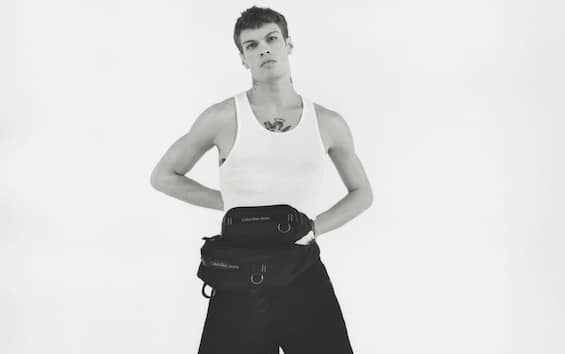 Blanco is the global face of the Calvin Klein Fall 2022 advertising campaign: the US brand that is the icon of 90s aesthetics has chosen the Italian singer as testimonial for this year’s autumn season.

Recall that the artist in the video clip of his song “Nostalgia” ran around Times Square wearing a pair of Calvin Klein boxers, which is why seeing him now in the shots of Calvin Klein does not seem like an absolute novelty, quite the contrary. As noted by the “fashion bible”, that is Vogue“The shots look almost like a sequel to the video clip Nostalgia which sees the young Italian talent running around Times Square simply wearing a pair of Calvin Klein boxers ”.
The journalist from VogueAsha Salim, adds that this looks like “a deluxe version of the first runs among the green meadows with white briefs, which has already become an iconographic element of her stylistic and creative maturation”.

Due to the fact that Blanco has a pair of white boxers as his distinctive and iconic sign, this partnership between him and the American brand fits perfectly. On the contrary: he fits boxers of the perfect size, to stay on the subject of underwear.

The singer commented on his new collaboration with the following words: “The collaboration with Calvin Klein allowed me to see New York for the first time”. The artist then focused on how that first overseas experience infused him with an exceptional dose of energy and dynamism, two of the main ingredients that have always characterized the recipe for the Big Apple.
“Calvin Klein for me is a brand that has symbolized the aesthetics of a generation since its inception”, added Blanco. “I live fashion as a language that reinforces the imagination of what I bring with my music and this campaign respects my personality”.

Not just boxers: also the tank top and the iconic 90’s Loose Jeans

The cult pieces that Blanco wore for the occasion are not only the iconic white cotton boxers (with the unmistakable elastic ton sur ton on which the brand name is imprinted in black): the artist has dressed many garments considered timeless classics of Calvin Klein first of all, of the Nineties secondly and finally of fashion in general.

The photo shoot – signed by fashion photographer Drew Vickers, a big name in New York glamor ‘n’ roll – saw Blanco lend himself to daring and sensual shots but in a veiled way, without ever falling into excess but, on the contrary, always remaining in that limbo of perfect balance of tones and atmospheres (as is the case with the photographer Vickers, on the other hand).

The singer wore a pair of black washed 90’s Loose Jeans; the Slim Sheer Knit Jumper combined with a pair of 90’s Straight Jeans in a white wash; a pair of classic low-waisted blue jeans from which the elastic of the boxers with the logo comes out.

The shots of the campaign

The photos immortalize him shirtless, as he looks directly into the camera and stands out against the monochrome background. A background that goes from white to black up to celestial blue, in homage – in all probability – to the homonymous album that marked its debut in September 2021. An album that, with over 1 billion streaming on digital platforms, confirms Blanco as one of the most popular Italian artists in Italy but also in the world, also thanks to his new adventure as the global face of the Calvin Klein Fall 2022 advertising campaign.

Below we show you the shot of the Calvin Klein advertising campaign starring Blanco, an image shared by the artist’s Instagram profile.