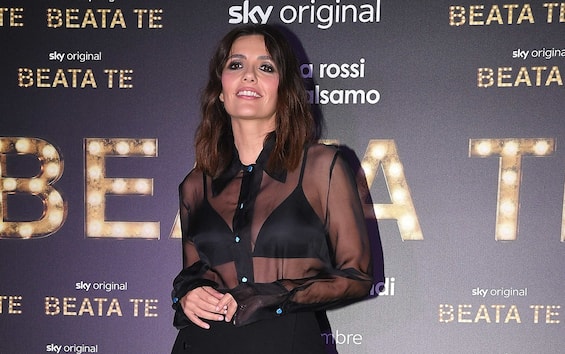 As Paola Randi, director of lucky you (available exclusively on Sky Cinema from 25 December and streaming only on Now): “The teachers teach us, comedy sets us free… and happy”. And the new Sky Original film, thanks to its elegance, irony and style, represents a dazzling example of how important and complex issues can be tackled with grace and intelligence in a feature film. The result is therefore fun and makes you think, through a language that can reach everyone. But for this to happen, the protagonist must be an authentic acting champion, an actress capable of being witty, sunny and empathetic, without ever resorting to clichés. And Serena Rossi, she has all these qualities. Perhaps one of the few performers capable of interacting credibly with an Archangel Gabriel who has the traits of Fabio Balsamo, an actor with an irresistible vis comica. Here’s what he told us after the film premiered in Rome.

How was the premiere of the film in Rome?

It was amazing to hear the laughter and reactions from the live audience. It’s something that hasn’t happened in a while. And then this is the first film I see with my son Diego. And in fact at the end of the screening he asked me: “Mum, are you happy you had me?” And I told him that it’s the most beautiful and greatest thing I could do in my life.

Instead, what was the first thing you thought when they asked you to play the character of Marta?

The script thrilled me. I devoured it. And it doesn’t always happen. Sometimes the subject seems interesting, but then while reading the script, everything goes limp. So I immediately said yes. I also choose films based on the message they want to express. I liked talking about motherhood and the freedom to choose by playing a character very different from me.

So you don’t have much in common with the protagonist of lucky you?

Aside from curly hair, I’d say definitely not. I think I’m more balanced than Marta, who’s a bit of a feather in the wind. Perhaps we share a certain predisposition for control, the desire to have the situation in hand. On the other hand, she is a director by profession.

And you, have you ever thought about directing?

I think I’m still small to do that. But when I’m on set, I think I have an overall vision and I don’t just think about the part I have to play. I like to observe everyone’s work and it doesn’t escape me. So much so that crew members often tell me that I should be a director and add that if I ever make my debut behind the camera they would want to be part of my team because I like to motivate others and being a team leader comes naturally to me. So maybe later in time I will.

What was it like acting with Fabio Balsamo with whom you had worked in 2020 in 7 days to make you fall in love?

After the audition he wrote me: “I would be happy to be your archangel”. And I was very happy to go back to work with him. We respect and appreciate each other and this experience on set has strengthened our friendship. Fabio is not just a comedian, he is a sensitive and highly cultured man.

Also in lucky you, demonstrate all your singing talent. But, sooner or later you’ll make another album after that Love that and In Pepe’s house?

At the moment I don’t have any recording projects. But I like to sing here and there. I sang in Fiorello’s program and I will participate as a guest in one of the Roman dates of the Tosca tour at the Auditorium. In short, it is one thing to be an actress to perform in a musical performance as happens in this film where I play Don’t Stop Me Now of Queen, it’s another to be a singer. It’s a real job and right now I wouldn’t have the time to do it.

One of the funniest moments in the film is when your character, Marta, uses online apps to meet a potential life partner. What relationship do you have with social media?

Of course, I don’t frequent dating sites (laughs ed), but in general I use social networks to promote my work, to talk about my projects or to illustrate the beautiful places I visit. I avoid making a show of my private life. I don’t post pictures of my son, just a little hand or a foot. He is still too young. Anyway, I have Facebook, Instagram and Twitter. I’m not ready for Tik Tok yet.

Finally, why see lucky you?

It’s a very funny film, but there are no obvious or vulgar jokes. He treats delicate subjects in a polite and elegant way. It is a very visually accurate work and is suitable for the whole family, a moment of aggregation in these festive days. And I believe that certain important messages, if told through the light form of comedy, can be better understood by the public.