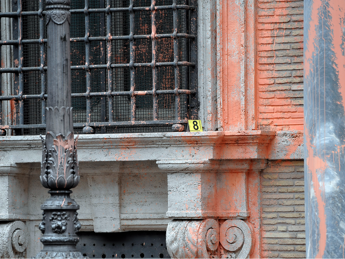 Demonstration of solidarity for Simone Ficicchia, summoned to the hearing

Next January 10 Simone Ficicchia, militant of Ultima Generazione, will be heard in court in Milan, following the protest action that took place last Tuesday in Rome, where five members of the environmental movement daubed Palazzo Madama with washable paint. For this reason, the collective has announced, for the same morning of January 10, a solidarity demonstration that will be held in front of the Palace of Justice in Milan.

“The case of Simone Ficicchia, a twenty-year-old member of Ultima Generazione, summoned by the Court of Milan, at the request of the Pavia Police Headquarters, to attend the hearing called on 10 January to discuss the application of special surveillance measures is neither the first nor it will be the last”, the Last Generation activists explain in a note. It is “certainly the Italian case in which the disproportion between action and reaction is more striking: in essence, the application of the Anti-Mafia Code, created for mafiosi, terrorists and criminals, is asked to be applied to a boy who has chosen non-violent protest to push the government to stop the use of fossil energy and curb extreme weather events that no one seems willing to stop”. Moreover, they add, the young man did not even take part in the blitz: “Simone was not among them – they assure -. He was in Rome because he was invited to participate in the Agorà broadcast on Rai3. However, the police stopped him at the exit from the door and prevented him from reaching the television studios”.

On the case, Ficicchia himself comments: “At the age of 20 I find myself with the future marked by the eco-climatic collapse and this seems to me really much more threatening than a provision from the police commissioner of Pavia. The measure that could hit me is certainly heavy and unprecedented, but it’s nothing we didn’t expect. In fact, I think we’ve already won.” The fact that “the same criminal state, which is condemning us to the worst future with gas and coal, is forced to carry out an absurd and disproportionate repression against a young citizen for non-violent protests, demonstrates the incisiveness they have had the actions and requests of the Latest Generation. I – he warns – am ready to accept the consequences for having chosen to listen to my survival instinct, just as many other people are ready”. For this reason, he concludes, “I invite everyone to join me on 10 January at 10 am under the court of Milan in Corso di Porta Vittoria, during the hearing. There, among other things, we will reiterate together that the fight against the eco- climate change is a fight to save our democracy and that measures like special surveillance only put it at risk.”