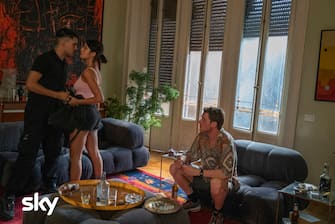 Bea, Ludo and Mahdi fight over Bea’s stolen drug. Mahdi is afraid of getting caught and wants to get the drug back for him before it’s too late. Bea would like to go ahead with the plan

Lorenzo, meanwhile, learns of the disappearance of the cocaine and suspects Rizzo, who threatens with a gun pointed to the head by Snake.

Mahdi arrives at the pizzeria just as he is being questioned by Lorenzo. Who eventually decides to give Rizzo some time to try to fix and recover the drug

WATCH THE VIDEO: Block 181, the drug to be recovered

Lorenzo does not believe that Rizzo stole the drug, he thinks it was the South Americans. Snake, however, does not consider the hypothesis plausible

Block 181, the locations of the TV series. VIDEO

While Ludo goes to the pharmacy to get some tachipirina for Mahdi, who in the pizzeria was hit with the butt of his gun by Snake, Bea takes care of him and hugs him.

Block 181, photos of the first 2 episodes

When Ludo returns home, the three go to sleep together, hugging each other

Bea’s constant absences make Victor suspicious. Celeste tries to text her friend without getting an answer, but she covers her back by going to steal in the shops of San Babila alone and being discovered.

Salmo and the cast of Block 181, a backstage video

Bea, Ludo and Mahdi finally decide to go on their own to try to sell the two kilos of cocaine stolen from the pizzeria

Bea, Ludo and Mahdi go to a party to create a circle of contacts to place the cocaine. Here they meet Matteo Vincenti

The war continues between the Rizzo Bloc and the South Americans. After a group of South American boys are beaten, Victor organizes the retaliation and goes to hit Rizzo directly.

Mahdi receives a message from Rizzo with the video of the damage caused to the body by the assault of the South Americans. He shows it to Bea and then goes to his uncle

Bea discovers that Celeste has been arrested. The lawyer intends to ask for parole and the girl will have to attend a psychologist

Ludo returns to his home and finds his sister Isa with a boy. She tells him she wants to leave the psychiatric clinic where she was hospitalized

But Isa has a crisis, accuses the boy of stealing a grandmother’s watch. Ludo reminds her that she had sold that watch herself three years earlier

Ludo and Bea go to Rinaldi, manager of the disco, to place 50 pieces of cocaine

Lorenzo and Snake go to Rinaldi, they too intend to sell him some drugs, but this tells him that he has already bought it, of the same quality and at a lower price. Snake beats Rinaldi to extract information on who sold him the cocaine

Rizzo, Mahdi, and other Bloc men ambush Victor. With him, however, there are Pulga and Celeste. Rizzo has Pulga and Victor taken and leaves Celeste free

Bea talks to Mahdi, he reassures her about the fate of Victor and Pulga by telling her that they will be released the next morning. So Bea takes command of the South Americans and calms them down, hiding what she knows from them

The next morning, when Rizzo and his men arrive to free them, Victor steals a gun and shoots Pulga. Returning to him, he makes them believe that the boy was killed by the Italians of the Bloc, swearing revenge. Mahdi tells the truth to Bea, but she doesn’t believe him and breaks up with him and Ludo