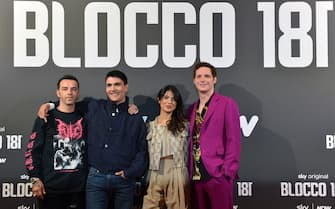 From May 20 the first Italian in-house Sky Studios arrives on Sky and Now, produced with TapelessFilm and Red Joint Film. Between love and crime, a story set in Milan that sees Salmo in the role of supervisor and music producer, creative producer and actor

Block 181, everything you need to know about the new Sky TV series with Salmo

“BLOCK 181 – ORIGINAL SOUNDTRACK”, the collaborative album with Salmo at the artistic direction, inspired by the Sky Original series, is out on Friday 27 May for Sony Music on all digital platforms and in stores

Block 181, trailer and poster of the new Sky Original series with Salmo. From 20 May

Block 181, the teaser trailer of the Sky TV series with Salmo

To bind their characters an unexpected and very topical love story, in a Milan whose torrid suburbs are a land of conquest for gangs at war for power, against the backdrop of the “Bloc”, an imposing building complex on the edge of the city. An anomalous and free bond, theirs, which will challenge the rules of belonging of the three boys and through which they will try to climb together those ranks of drug trafficking that they had always suffered before

They come from different realities, but they are linked by something strong: Bea (Laura Osma) is a Latin American girl divided between loyalty to her family, Misa, and the desire to change; Ludo (Alessandro Piavani) and Mahdi (Andrea Dodero) are friends from different social backgrounds, united as brothers. Salmo is Snake, Lorenzo’s right arm, a dealer played by Alessandro Tedeschi (Petra, Curon, Non Lie), in turn a childhood friend and ally of Rizzo, the boss of the neighborhood played by Alessio Praticò (Il Miracolo, Il Hunter, The Traitor)

Block 181, everything you need to know about the new Sky TV series with Salmo

Block 181, trailer and poster of the new Sky Original series with Salmo. From 20 May

The set photos of the series, which from 16 to 29 May can be admired in the heart of the city of Milan, where they will be exhibited in Corso Vittorio Emanuele in an extraordinary temporary exhibition, are by Gabriele Micalizzi, one of the best known and most appreciated war photojournalists to the world, contributor to international newspapers including The New York Times, Herald Tribune, The New Yorker, Newsweek, Stern, Wall Street Journal

Block 181, the teaser trailer of the Sky TV series with Salmo

Also editorial consultant for the series, Gabriele Micalizzi collaborated with the creative and editorial team of Block 181 making available his knowledge of the Latin communities, the result of the great research and study on Milanese crime he carried out over the years on Milanese crime.