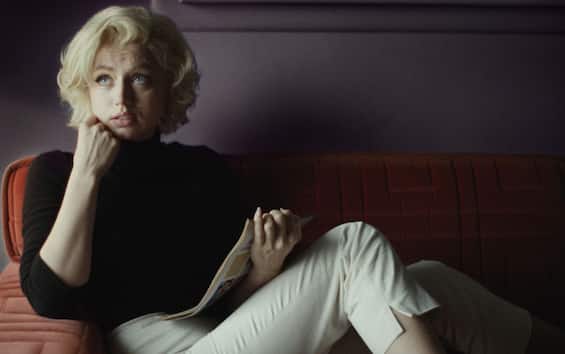 “Only beauty was left and you carried it with you like an obedient smile. Obedience requires too many swallowed tears, giving oneself to others, too many cheerful looks that ask for their pity! So you took away your beauty. It disappeared. like a dust of gold “. They are verses written by Pierpaolo Pasolini on the occasion of the death of Marilyn Monroe, which took place on 5 August 1961. A sort of poetic counterpart of Blonde, the film presented in competition at the 79th Venice Film Festival and directed by New Zealand director Andrew Dominik. The filmmaker returned to the Festival after taking him to the Lido in 2007 The murder of Jesse James at the hands of the coward Robert Ford (Coppa Volpi to Brad Pitt for the best male interpretation). Taken from the book of the same name by Joyce Carol Oates in which reality and fiction coexist, the feature film, which did not receive any recognition at the Festival, but was welcomed by the public at the end of the screening by a 14-minute standig ovation, is a biopic from soul divided in two. A film focused on the perpetual and dangerous oscillation between Marilyn Monroe and Norma Jeane, between the mask and the face. The film is available on the Netflx platform starting Wednesday 28 September

Blonde it is not a corrective and dull reproduction of the life of an icon of cinema and beyond. But an ambitious attempt to decipher the code of the soul of a star, too often confined to the narrow prison of the giuliva. Character, vocation and destiny of the actress are interpreted in the light of a denied childhood. Child never loved, due to a destitute and mentally disturbed mother and a father never known, Norma Jeane finds in her alter ego Marilyn Monroe a lifeline, a way of escape. The depressed girl with a stuffed tiger as her only friend is reflected in the shapely simulacrum desired by the entire globe. But a divided ego, over time, loses the sense of reality and the light of reason. Of course, “it is always better to cry in a Roll Royce than in a crowded tram”. However, in the end, the pain kills you.

In Blonde we do not witness the slavish reconstruction of Miss Monroe’s career and loves. So much so that both the name Joe Di Maggio and Arthur Miller are never mentioned in the film. The star always calls them “daddy”. Still, the character played by Bobby Cannavale is a celebrated retired baseball ace. Like Adrien Brody who plays the role of an established writer. In short, those we see on the screen are the two husbands of the diva, but always told through the eyes of the protagonist of the biopic. Resistant Andrew Dominik is interested in telling the odyssey of torment, the journey at the end of the night of an anomalous blonde. An actress who reads Dostoevsky and would like to play Chekhov, but who finds herself posing without veils. Because Norma Jeane is Marilyn Monroe’s slave.

Los Angeles burns as Norma grows alone. And from the cameo in Eva Against Evain the company of the titan George Sanders until the skirmishes with Billy Wilder on the set of Some like it hot, the film explores the main moments of life’s existence with frugal richness. In a hide and seek game between cinema and life, in an alternation of sequences and colors, Blonde it brings to the screen the wearying split between body and soul. A duel of Greek tragedy with a truly tragic ending, with a universal significance. According to the philosopher Edgar Morin, Miss Monroe’s departure was “the death toll of the Star System”. But Marilyn will be a star that will shine forever. After all, when we look at the sky, we look at the past. Thus the missed motherhood, the uterine visions, the martini cocktails, the auditions, the producer’s sofa, the flashes of photographers, the sleeping pills, are transfigured in the witnesses of the funeral march of a woman who would have liked to be a mother, as well as a wife or unreachable erotic dream.

The myth of Marilyn is everywhere. And it was a great risk to carry it to the big screen in a work of fiction. The holiday village show effect is upon us, because a wig and a white dress are not enough to evoke the famous scene of When the wife is on vacation. But Ana de Armas fits perfectly into the role of a blonde. She spent three hours in make-up for each day of filming and lessons to lose the Cuban accent. The result is that the actress gives us back the soul as well as the body of Monroe. Even in the controversial and daring sex scene with the President of the United States (which everyone keeps talking about, but you can’t reduce the entire film to this one sequence), the close-up of her dazzles and strikes. And that stuffed tiger becomes something of a “Rosebud” equivalent of Fourth Estate. And maybe it will still be true that men prefer blondes, but the world told by Blondeinstead, no. Norma Jeane’s life doesn’t resemble the final sequence of Some like it hot, with the iconic punchline “No one is perfect” from billionaire Osgood Fielding II. Among the glossy covers, Max Factor’s make-up, paparazzi flashes and barbiturates, there is no happy ending. And we return to Pasolini and to the final lines of the poem dedicated to Miss Monroe: “Now it is you, the one that counts for nothing, poor thing, with her smile, you are the first one beyond the gates of the world abandoned to her fate of death. “