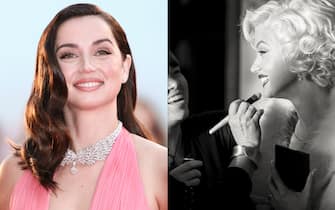 The most successful character of the casting marked by the extreme realism of Blonde, whose actors are very similar to the real characters they play in the film, is certainly Ana De Armas who said she underwent over three and a half hours of makeup and hair a day during the filming of Dominik’s film. Her is an extraordinarily convincing Marilyn Monroe

The replica effect is valid both for the features of the actress and for the costumes. In the preview images, audiences recognized Monroe’s iconic outfits from the time of the film When the wife is on vacation

Ana de Armas, the emotion after the 14 minutes of standing ovation for Blonde

In another scene, De Armas is engaged in the singing and dancing sequence with the fuchsia dress and the showy jewels of Diamonds Are a Girl’s Best Friend in the movie Men Prefer Blondes. The wardrobe of the film is curated by Jennifer Johnson (former costume designer of Tonya by Craig Gillespie)

Venice Film Festival: Blonde, the review of the film about Marilyn Monroe

Bobby Cannavale was given the role of Monroe’s second husband, the first famous, the sportsman Joe DiMaggio with whom the diva was married only a year

WATCH THE VIDEO: Blonde, the trailer in Italian of the film

For hair and physicality, the American actor has a lot in common with the stars and stripes baseball star even if the age between character and performer does not coincide. Cannavale is over fifty while DiMaggio married Monroe when she was forty

Venice Film Festival: the votes for the looks of the stars, from Brad Pitt to Ana de Armas

To Adrien Brody has touched the role of the third and last husband of Marilyn, the famous playwright Arthur Miller. Long held in consideration by Hollywood for intellectual roles, the Oscar winner actually has some traits in common with the author of Death of a traveling salesman

Another of the famous personalities of Monroe’s public life is the then president of the United States John F. Kennedy who has had numerous interpreters in various films and TV and who now has the face of Caspar Phillipson who has already played in the role. of the politician in Jackie by Pablo Larraín

Blonde, the photos of Ana de Armas as Marilyn Monroe

In another scene photo, Monroe / De Armas is caught having a spree with two friends of the time, Cass Chaplin and Eddy G. Robinson Jr., both part of the immense acquaintances of the diva and respectively children of Hollywood legends. Charlie Chaplin and Edward G. Robinson, the great actor of film noir. On the screen, the two young men are played by Xavier Samuel and Evan Williams

Brad Pitt, the surprise arrival in Venice for the premiere of Blonde

Julianne Nicholson in the film plays, instead, Gladys Pearl Baker, the mother of the actress who has a fundamental role in Monroe’s troubled childhood and in this film that tells her story from a psychological point of view

Actress Sara Paxton puts her face to Rose Louis “Miss” Flynn. The actress has already starred in Aquamarine And Sleepover

Fundamental in the life of Norma Jeane, committed to “becoming” Marilyn every day of her life since she embarked on the path of fame, makeup artist Allan “Whitey” Snyder who lives again on the screen thanks to Toby Huss, an American actor well known for his career in cinema and tv