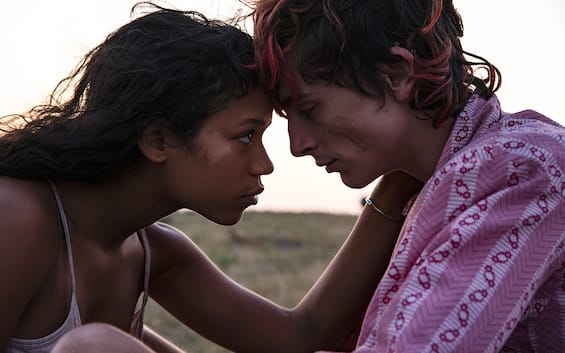 “Above pregnant pyres suck my last breaths / And then eat me / Angels in harmonic cries / Celestial spirits / They are never satisfied / the great cannibal love devours me”, sang Gianni Nannini on a text penned by Isabella Santacroce. And Bones and All it’s a film that consumes your soul like great loves. After the success of audiences and critics at the Venice International Film Festival, Bones and All by Luca Guadagnino, winner of the Silver Lion for directing, will be in cinemas from today, Wednesday 23 November, distributed by Vision Distribution. After Suspiria, the tribute to Dario Argento’s masterpiece not sufficiently understood by critics and audiences, once again the director demonstrates his immense talent in recounting the restless adolescence, the emotions, the disturbances of the outsiders of those who live on the margins of society and do not understand what is its place in the world. Just think of the confused and (un)happy protagonists of the miniseries We Are Who We Are. But this time the filmmaker from Palermo succeeds in the miracle of combining poetry with anthropophagy.

You immediately understand that Bones and All, film adaptation of the novel of the same name by Camille De Angelis, it is not an All you can eat and much less a gala lunch. With those made-in-USA landscape paintings suspended between trellises and wheat fields, the campus lockers and female students intent on trying copper fever-colored nail polishes or cinnamon glaze, the incipit deceives the viewer. Some might believe they are witnessing an arty version of Girls in Beverly Hills. And instead Maren Yearly (played by the Canadian Taylor Russell, awarded at the Venice Film Festival as best emerging actress) bites her friend’s finger with the ferocity of a panther. In short, bye bye teen comedy. Guadagnino’s film and also a voracious journey at the end of the night. A ravenous foray into the darkest and most disturbing impulses of the human psyche. But it’s also a sincere and powerful reflection on how complicated it is to become who you are.

eMaryland to Ohio, Indiana to Minnesota, Kentucky to Idaho, Bones and All it takes you across the States between the months of May and August. A tour without too many comforts, with the awareness of how painful and complicated it is not to be in control of one’s impulses. Life can be very hard and desolate if you feel like a monster hungry for human flesh. Only meeting someone who has the same appetite as you can change the cards on the table. So in the America of the Reagan presidency, while Kiss are on tour with Lick it Up, Maren meets the cannibal of her dreams. It is not the very refined Hannibal Lecter, capable of transforming even the human brain into a gourmet dish, but the disheveled Lee who has the face of Timothée Chalamet, who after Call me by your name. Beautiful Boy And Dunes, confirms himself as one of the most versatile and talented actors of his generation. In short, even the cannibals have a heart and do not try to devour each other. The cannibalistic couple would like to live like everyone else and at least for a while would like to avoid swallowing tartars of the human race. But a sinister character named Sully with a scary look is lurking. You know, you should always be wary of those who talk about themselves in the third person.

Bones and AllHorror and romance according to Guadagnino

Among the blood that drips from the clothes and on the floor and the bodies mutilated with bites, Bones and All it overflows strong sequences, but it is not a matter of gratuitous violence. Indeed the feral ferocity shown by the two protagonists, by contrast, amplifies the sweetness and alchemy between two lost souls who share the same insatiable passion. A deep relationship that goes down to the bone. On the other hand “Omnia vincit amor”, wrote Virgil. And sometimes love is stronger than hunger and maybe even death.