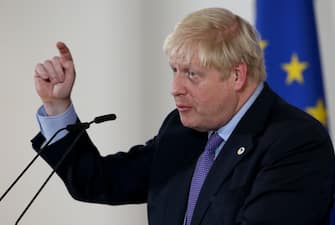 Boris Johnson arrived at number 10 Downing Street in July 2019: three years later, in July 2022 and after dealing with Brexit and the pandemic, the British premier risks his seat. Overwhelmed by scandals, from the Partygate to the Pincher case, his government is losing pieces: the request for a step back has come from many sides. Here is his photo story

WATCH THE VIDEO: All the scandals involving the Johnson government

Boris Johnson was born on June 19, 1964 in New York, where his father Stanley (politician and writer) studied at Columbia University. His parents, however, are English. That’s why the premier had the double citizenship

Renunciation of American citizenship in 2016, when his rise in the Conservative party begins. A choice motivated by the belief that, for a politician of national level, it was not correct to have a double passport

Brexit, the stages of divorce from the European Union. PHOTO

After graduation, begins his career as a journalist. Pass by the editorial offices of The Times And Daily Telegraph. It is noted, among other things, for its (Eurosceptic) correspondences from Brussels

All news about Boris Johnson

Although controversy arose in Brussels related to the reliability of his articles, Johnson arrives at the direction of the weekly The Spectator

He has been married three times and has seven children: the first wedding in 1987 with Allegra Mostyn-Owen; the latter, in 1993, with Marina Wheeler, with whom he had four children; then the fifth child was born, from a relationship with the art consultant Helen MacIntyre; the third marriage in 2021 with Carrie Symonds, twenty-four years younger, former head of strategy and communication for the Tories. Symonds, current partner Johnson, gave the premier two children

Boris Johnson’s debut in politics dates back to 2001, when he was elected to the English Parliament with the conservatives. He stands out, compared to his party colleagues, for his “liberal” positions

Brexit, all the news

Pioneer of bike sharing, the mayor is also noted for some gaffes. Famous is the one in which he gets carried away during a rugby match and runs over a child

In the 2012year in which London hosts the Olympic Games, Johnson comes reconfirmed at the helm of the city. And at the end of the second term you still have a consensus that exceeds 50%

He enters Parliament in 2015. For many he is the confident Tory leader, but he spends a few more years than expected before making it to the top

With the victory of Brexit and the resignation of then Prime Minister David Cameron, Johnson is named foreign minister in Theresa May’s new government. He will step down in July 2018 in protest against the soft line on leaving the European Union

May gets stuck between Brussels and London and the stalemate on Brexit undermines his mandate. Johnsonmeanwhile elected leader of the Tories, enters Downing Street like this: on 23 July 2019 he is officially proclaimed leader of the Conservative Party, the day after Queen Elizabeth II, after accepting Theresa May’s resignation from the post of Prime Minister, instructs BoJo to form the new government

Between rejections and controversy for having suspended the British Parliament for a few weeks, on 17 October 2019 Johnson reaches an agreement with the EU to take London away from Brussels

February 1, 2020 the UK’s farewell to Europe has officially become a reality

Brexit, the UK’s farewell to the EU is a reality. Johnson: “It’s the dawn of a new era”

The global pandemic of Coronavirus officially declared by the WHO in March 2020, it forced to put aside all other issues to deal with the health emergency

On March 12, 2020, the British Prime Minister, with respect to the Coronavirus emergency, declares that the crisis will last for months and that many families would have lost their loved ones. Johnson had not foreseen containment measures, only to retrace his steps by putting the United Kingdom in lockdown like many other countries in the world

Coronavirus, Johnson: “Many other families will prematurely lose loved ones”

Boris Johnson also tested positive for Covid-19 at the end of March 2020. His condition worsened within a week and the premier was hospitalized in intensive care on 6 April 2020. On 12 April he was discharged

But during his mandate, the premier also has to deal with some scandals. In particular, between 2021 and 2022 the Partygate: several testimonies emerge of parties in Downing Street, some with BoJo present and then fined, in periods when the country was in lockdown and were not allowed. Johnson’s popularity begins to decline, but the government moves on and a no-confidence vote is also rejected

New case in July 2022: a sex scandal invests Chris Pincher, forced by the Sun’s revelations to resign from his strategic position as deputy chief whip after getting drunk in a club and “groping” two men. Johnson is forced to admit that he was briefed on at least one of the many previous suspicions circulated about his ally. He apologizes, says there can be no room in the government for “sexual predators”, calls Pincher’s failure to torpedo “a mistake”. But that’s not enough: with several resignations, his government is shaking