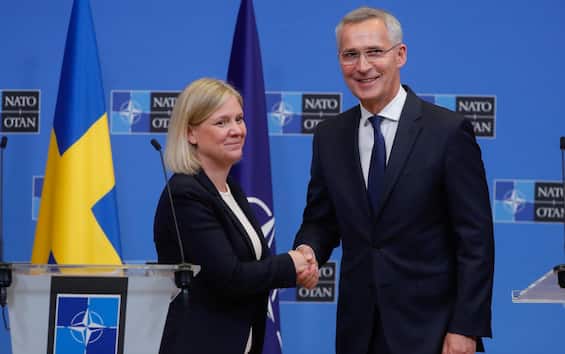 The agreement between Turkey, Sweden and Finland for the entry of the two Scandinavian countries into the Atlantic Alliance seems to be closer. NATO Secretary General Jens Stoltenberg, in a press conference with Swedish Prime Minister Magdalena Andersson, announced: “There will be a special session on terrorism at the Madrid summit. Sweden has taken practical measures to address Turkey’s legitimate concerns, including a new legislation on terrorism, new police investigations into the PKK and is considering the extradition requests presented by Ankara. We are now working on a tripartite agreement between Sweden, Finland and Turkey on the issues of security, terrorism and arms exports “.

Sweden: “We want an agreement with Turkey in a short time”

Speaking from NATO headquarters in Brussels, Sweden’s premier Magdalena Andersson added: “Turkey has raised some issues and our ambition is to reach an agreement in a short time, possibly before the Madrid summit. I had one on Saturday. exchange of views with President Erdogan, and I can define them constructive. As a member of NATO we would be in solidarity with Turkey: Sweden condemns terrorism unequivocally and to meet Turkey’s fears, the laws on terrorism have been strengthened, the requests analyzed extraction “.

Turkey: “No to Sweden-Finland without stopping terrorists”

At the heart of Ankara’s refusal so far to the entry of Sweden and Finland into the Alliance is precisely the theme of the PKK, the Kurdish party: “It is not possible for us to approve membership of NATO if they do not completely cut their support. to terrorists “, said the Turkish Defense Minister Hulusi Akar, according to a statement from the ministry, in relation to the application for membership of the Atlantic Alliance of Sweden and Finland. Ankara continues to oppose the candidacy, accusing the Scandinavian countries of supporting groups deemed terrorists from Turkey.

“White House does not rule out bilateral Biden-Erdogan”

And after Sweden’s opening to Turkey’s requests, a signal towards détente also seems to arrive from Washington: “At the moment a bilateral Biden-Erdogan” on the sidelines of the NATO summit in Madrid is not on the agenda “but let’s see how the next 24 hours, there is work in progress, ”US National Security Advisor Jake Sullivan said in a briefing with the US press in Germany.

Stoltenberg: “Russia is now the main threat to NATO”

Meanwhile, NATO’s attention remains focused on the conflict in Ukraine: “I expect that the allies in Madrid will point to Russia as the main and most immediate threat to our alliance,” said Secretary General Jens Stoltenberg. At the Madrid summit – moreover – NATO will approve the most important strengthening of its capabilities since the end of the Cold War and take the high-readiness forces beyond the threshold of 300,000 units.