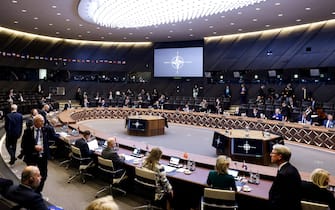 With the conflict in Ukraine, it has once again acquired a central role Born, that is the Atlantic Alliance born in 1949 with the aim of guaranteeing the security of the Western world through a collaboration in the defense sector. To date, 30 countries are part of it, including Italy, which is also one of the 12 Founding states

WATCH THE VIDEO: Ukrainian war, Yermak: if we were in NATO it would not have happened

As a member country, Italy contributes to the organization’s budget and is required to respect the North Atlantic Treaty, that in article 5 it commits it to intervene should another NATO state be attacked. It also participates in the organization’s missions and also hosts bases

Ukrainian war, Zelensky: “We cannot enter NATO, it must be admitted”

Carla Monteleone, professor of International Relations at the University of Palermo, said in an interview with Agi that the presence of these bases in our country is crucial. “They are extremely important in Italy because our country is in one geographically relevant position. Looking at the crisis areas on a map, many of them are concentrated around us, and having these bases of support is relevant ”

It is not known exactly how many NATO bases are in Italy. We talk about 120 structures located in all regions with the exception of Valle d’Aosta, Molise and Umbria. In addition to these, there should be others winds about which are not officially recognized for security reasons

Russia-Ukraine war, how the NATO shield against missile attacks works

One of the most important NATO bases is that of Sigonella, in Sicily. As stated on the website of the Ministry of Defense, here is the fleet of Global Hawk RQ-4D AGS, or remotely piloted aircraft that have also been used in Ukraine to monitor the movement of Russian troops

War in Ukraine, from cluster bombs to thermobaric: the weapons used by Russia

In the same statement, the Ministry explained that “on the military airport of Sigonella, since the activation of the NAGSF in 2015, NATO is feeding the organic positions with qualified personnel of all the nations of the Atlantic Alliance and is preparing suitable infrastructures dedicated to the operations, training, maintenance and support of the entire AGS weapon system, as well as to the analysis and dissemination of ISR (Intelligence, surveillance and reconnaissance) data collected ”

The Ministry communiqué on the fleet of remotely piloted aircraft

Nato is also present in the Neapolitan area with theAllied Joint Force Command, a military command based in the Lago Patria fraction of Giugliano in Campania, and in La Spezia, in Liguria. Here is in fact the so-called ‘Center for Maritime Research and Experimentation‘(CMRE) formerly known as’ NATO Undersea Research Center’

In Poggio Renatico, in the Ferrara area, there is the Deployable Air Command and Control Center, whose mission is “to prepare elements for global operational deployment and, together with combined air operations centers, provide well-trained and specialized experts to augment Allied air command during Allied operations and exercises.” Among other things, he is responsible for controlling the air missions

What the Deployable Air Command and Control Center does

In Friuli-Venezia Giulia there is instead the base of Aviano. The Post reports that since 1955 an agreement has been in force between the United States and Italy for the joint use of this infrastructure, which is also owned by NATO, and that some atomic bombs B61-4. Units also departed from Aviano and took part in a joint Alliance exercise on 9 March

In Taranto, however, there is a part of the so-called NSPA’s Southern Operational Center (SOC). As stated on the organization’s website, “being responsible for managing the entire life cycle of deployment infrastructures, the SOC has consolidated its ability to rapidly deploy resources by contributing to the readiness of Alliance nations during exercises and operations. ”