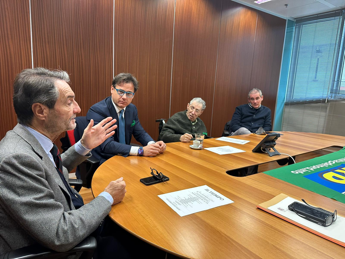 Senatur pressing on the Lombard governor, the rebels expelled by Salvini at the table

“You are the one who signs the appearances, the Committee is available to support you, but you have to say if you want them with you or not”. It was the day in which Umberto Bossi moved personally for the second time for his Northern Committee, failing to deal ‘directly’ with Matteo Salvini, he left Gemonio in the morning and reached the president Attilio Fontana, at the Pirellone, to ask him to take charge of the political demands of his Northern Committee.

After the debut among hundreds of militants, on Saturday 3 November at the castle of Giovenzano, this morning the “president for life of the Northern League”, as can be read in a note from his correntone, released by his followers, asked Fontana to “join active with coalition allies in order to recognize the Northern Committee as a list within the centre-right coalition in support of President Fontana”.

A request that also discloses the intention of the northerners to run for the regional elections on 12 and 13 February with independent lists. Request that the governor Fontana lets it be known that he will make him: “I will promote with the center-right coalition the need to welcome them too”, he says after seeing Bossi, but he does not hide that “the road seems narrow to me”.

Bossi to Fontana, ‘Committee intercepts malaise, whoever comes to us does not go with Fdi or Renzi’

Bossi’s reasoning is clear: if an understanding is found with the northerners, Fontana has the guarantee that whoever broke with the League will be on his side, starting with the vote in February. The old boss still explains that when his Committee was not there, those who left the League in the regional council chose, for example, the Third Pole, as was done by the former Salvinian Gianmarco Senna who will support the candidate for president Letizia Moratti. The other four ‘rebels’ instead found support in the Committee that Bossi founded, ready to continue supporting the outgoing governor. Rumors of others on the way out continue to circulate even today. “Whoever comes with us – Bossi would have reminded Fontana – does not go with Fdi or with Renzi and Moratti”.

At the table of the Regional Council are the lieutenants of the old boss, the men who coordinate the Northern Committee, the MEP Angelo Ciocca and the former deputy and secretary of the Lombard League, Paolo Grimoldi. With them the regional councilors Roberto Mura, Federico Lena, Antonello Formenti and Max Bastoni, the four expelled by Salvini, after the breakup of the past few days. Everyone listens to Bossi’s words, Fontana knows that important votes are at stake for the region: “I will also take charge of promoting a meeting, a table to clarify everyone’s positions”, he explains again with reference to a forthcoming meeting between Bossi and Matthew Salvini.

Now the ball passes to Via Bellerio, with Salvini who will have to give an answer, let people know if he wants the votes of the Committee for Fontana, or he will take the hard line of expulsions, which have reached the end of the statute, the statute of the League for Salvini premier, who remains something distinct from that of the old Northern League, of which Bossi is president for life.