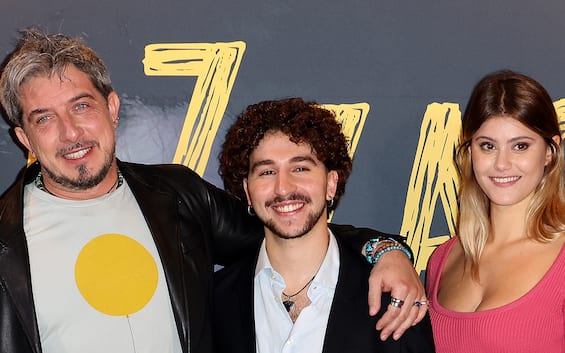 Naughty boy is in cinemas from 3 November. Written, directed and produced by Paolo Ruffini, the film, set during the pandemic, tells the story of Mattia, what we would commonly call a bully. A student, who behind his hardness hides a fragile world, made of communication difficulties, anaffectivity, lack of listening. But when Mattia falls in love with Lucia, the idealist and rebellious school representative of the school next door, her life and his dreams will change forever. We met Alessandro Bisegna and Jenny De Nucci, the young protagonists of this love story at the time of Covid

Alessadro Bisegna trained at Massimiliano Bruno’s Performing Arts Laboratory. At the theater he starred in a play by Maurizio Lops A Beautiful Bugito. He made his big screen debut in 2020 with In vacanza on Mars directed by Neri Parenti. In 2022 you starred in Claudia Gerini’s debut feature Tapirulàn.

Jenny De Nucci made her debut in 2018 by joining two highly successful Rai productions: One step from Heaven And Don Matteo. In 2019 you presented the short film on the occasion of the Venice Film Festival Happy Birthday by Lorenzo Giovenga together with Achille Lauro. In 2021 you starred in Enzo Dino’s docufilm, The places of hopea on Prime Video and in the sequel to the film On the most beautifulTOeven more beautiful, on Netflix, directed by Claudio Norza. She lent her voice to the character of the wolf cub Porsha Crystal in the Italian version of Sing 2.

The interview with Jenny De Nucci and Alessandro Bisegna

The first thing that came to your mind when you discovered that you were going to be the protagonists of Bad Boy?

JENNY: I was cooking when my agent called me and said: “Paolo Ruffini would be there who would like you to be the protagonist of his film.” I stopped making the sauce and said wait, I’ll call you in a moment. I called back I said are you serious? And he said, “Yes. Now I’ll send you the script let me know if you like it. ”Obviously I fell in love with the subject and when we started shooting I was delighted to be able to give the boys a voice during the lockdown.

ALEXANDER: I remember that I was in DAD and I was following an acting lesson in Turin. When I read on the phone “Paolo Ruffini, I said to the teacher: I have to go to the bathroom for a moment. When Paolo asked me: “Do you want to make the film as the protagonist? I don’t even remember what I said because I stammered. It was an incredible emotion. A moment I will never forget.

How was the relationship with Beppe Fiorello, Sabina Impacciatore and Massimo Ghini, protagonists of the film?

JENNY: “It was incredible. At first I was a little scared because they are masters and I am a fan of all three. On the set they were exquisite and put me at ease because they know what it means to be 20 and to start doing the first leading roles. Sharing a set was just a huge gift for me ”.

ALEXANDER: “They were super nice to both of them. Sabrina gave me advice on how to memorize lines and made me understand, even with a simple pat on the back that they believed in me. They helped me a lot ”.

Did you put anything of your life into the characters?

JENNY: “Like Lucia who is a class representative, so am I. I fight for the rights of others, I did not take the DAD because at the time I had already finished high school and so I let my friends tell me about their experience ”.

ALEXANDER: “Mattia, my character, is very distant from me. I have never been a bully but it often happened to me that someone said to me “but as a first impression I didn’t like you, instead you are sweet”, so we have this thing in common, me and Mattia who at first are very defensive “.

How is director Paolo Ruffini on the set?

JENNY: “The calmest director in the West. He could drop the world at any moment but he was always quiet ”.

ALEXANDER: “Paolo knew what atmosphere he wanted to be on the set of such a film and always kept an incredible calm”.

What relationship do you have with social networks?

JENNY: “I live them with serenity. How a 22 year old girl who has Instagram and Tik Tok I like to create content and I like to talk about my passions with people and share what I do. I also have another social account where I put all the film shots I do because in addition to acting, my great passion is photography. “

ALEXANDER: “With social media for a couple of years I have been more of a spectator, when I was younger around 16 I used them a lot, it was my diary, I said whatever growing up I started to struggle to show myself. As a spectator I believe that Tik Tok is a very underrated platform; allows you to see what you like, thanks to this algorithm. For example, in this period I watched House of the Dragon and it only offers me things about this series and it is beautiful ”.

Do you also believe that love is the most contagious thing?

JENNY: “Yes, love is the most beautiful thing in the world”.

Alexander: “Love doesn’t make you think about many things, it distracts you in a very positive way”.

Finally, why see this Bad Boy?

JENNY: “Because a film that talks about love made with a lot of love and it is something that transpires a lot”.

ALEXANDER: “I agree and add that it is a film that speaks of redemption and I believe that in this work, families, teachers and children can find themselves in search of personal revenge”.