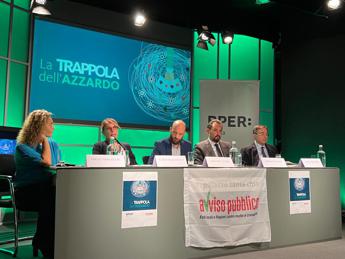 Increase awareness of the risks and dangers that revolve around the world of gambling by trying to involve and raise awareness as many people, with particular attention to the world of young people, the banking world and that of local administrators. This is the main objective of the project ‘The trap of gambling‘, presented today, Tuesday 11 October, in Rome, at the former Rossini Theater, in Piazza Santa Chiara, 14. Bper, underlines Flavia Mazzarellathe president of Bfor Banca
“has also decided to take on a social role within this phenomenon which is increasingly affecting families and the community. Up to now, the serious consequences and social repercussions of the ‘pathological gambling’ phenomenon have been underestimated. Perhaps the most worrying signal is that of young people, some even minors, who are increasingly “attracted” to online betting and slot machines “.


The Bper Group, adds Mazzarella, “has been committed to this front for years, implementing various voluntary actions that a Bank has a moral duty to implement to protect its customers and their families, supporting them with aawareness and information activities that it carries out in schools or organizing conferences in the territories where it is presentlike the one of today in the splendid stage of the Eternal City together with Public Notice which supported us in the realization of this project “.

For the president of Public Notice Roberto Montà“the project conceived with Bper Banca represents a further attestation of the commitment that Nota Pubblico and Bper Banca have been carrying out for several years to prevent the widespread phenomenon of pathological gambling that increasingly affects the younger generations. The project, in the coming months, will involve five Italian cities from North to South of the country through ten training and awareness-raising meetings both with students and with citizens and local institutions. We will also create a Vademecum with a focus on online gamingto provide more knowledge tools on the main critical issues related to the widespread gaming offer (legal and illegal) on the Net, to recognize pitfalls and dangers, and to protect the health and personal and financial data of users “.

Together with the aspects related to health and addiction, Montà concludes, “we will also address the mafia relationship and gamblingwhich as confirmed by the latest half-yearly report of the Anti-Mafia Investigation Department presented a few days ago by the Minister of the Interior, represents one of the main sectors of mafia interest for criminal organizations, with significant implications both within society and in the economy “.

“Modern organized crime has long since adopted the crime as a service model. Where there is a need, they present themselves with their offer: an economic offer, an offer of services, an offer of availability of violence, therefore a reserve of violence or reserve of wealth – underlines the Deputy Prosecutor of the National Anti-Mafia Directorate Giovanni Russo -. In this case, the acute pathological gambling addiction, as also results from your systematic data collection included in the contextual analysis of this project, from the pandemic that we have all suffered, has opened up even more fertile ground to go to. poke their interests. Organized crime, today more than ever, is looking for business opportunities, and gambling is a terrific opportunity: for a control of the territory, to come into contact with subjects who will have to be worn out, for recycling that is increasingly difficult to uncover “.

“The National Center for Addiction and Doping (Cndd) has undertaken various actions in recent years to contribute to the knowledge of the phenomenon and to the creation of synergies between the various actors involved in combating gambling disorder – he concludes Adele Minutillo of the Addiction and Doping Center Istituto Superiore di Sanità -. The epidemiological investigations completed in 2018, have returned a photograph of the diffusion of the phenomenon of gambling behavior which affects about 36% of adults and 29% of young people between 14 and 17 years of age who shouldn’t have access to this type of business anyway. Specifically, among gamblers there is a 3% of adults and minors for whom problematic gambling behavior has been observed. This highlights the need to adopt differentiated and specific responses with respect to the individual types of subjects (for differences in age, gender, profession, etc.). The issue must be addressed as a problem of public and social health, and must also pass through the strengthening of the staff of the Ser.D “.