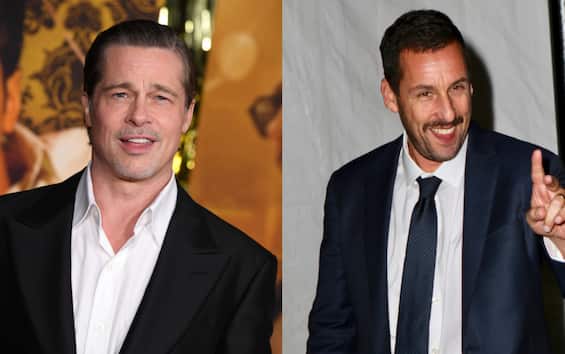 It seems that we will see Brad Pitt and Adam Sandler tread the same set, that of the next film by Noah Baumbach. To support it is the New York Postwhich recently exclusively broke the news that the two actors are expected to team up for a project that is part of the deal between the film’s director White noise and Netflix.
One month after Baumbach’s latest film effort appeared in the streaming platform’s catalogue, White noise Exactly, here comes this bombshell.

After the more than 140 million dollars spent on the film Story of a marriage of 2019 (produced by David Heyman’s Heyday Films and co-financed by Netflix, which also handled its distribution), it therefore seems that the streamer is ready to invest large sums again in order to have a trio of aces of the caliber of Baumbach , Pitt and Sandler.
For now on ImdbPro there is still nothing related to this new project: among the latest rumors relating to Noah Baumbach, there is only one that sees him as screenwriter of the film Barbie (directed by his partner, Greta Gerwig).

Nevertheless the New York Post has no doubts: “Netflix has given the green light to a new film starring Brad Pitt and Adam Sandler, which will be directed by Noah Baumbach, an industry source told exclusively to The Post”, begins the journalist Johnny Oleksinski in the exclusive article that appeared in the US newspaper.

Details about the film are scarce, but it seems certain that the project is in early development. Baumbach signed an exclusive multi-year deal to make various films for Netflix in January 2021, after his film Story of a marriage it was nominated for six Academy Awards, including Best Picture, and won the statuette for Best Supporting Actress (which went to Laura Dern).

The New York Post has contacted Netflix for an official comment, which has not yet been received.

It would be Pitt and Sandler’s first time together

Until now Brad Pitt and Adam Sandler had never shared a film set. Yet between the two (who are great friends) a strong and clear empathy is evident, as well as strong and rare, as emerged in the meeting organized three years ago by the US magazine variety for the series of conversations Actors on Actors (of which you can find the video at the bottom of this article).

If the sources consulted by the New York Post they are not mistaken, what is to come will certainly be an exceptional film.
The same American newspaper notes that by now in Hollywood hiring several very sought-after stars to be directed by an Oscar-nominated director is now a codified formula, not to mention a Propp scheme. Or not to say the law (of showbiz without a doubt).

If Brad Pitt and Adam Sandler certainly need no introduction, Baumbach also doesn’t require them, at least since he signed the original screenplay for Story of a marriage and it’s The squid and the whale (The Squid and the Whale2005).

As for Brad Pitt, 59, he is believed to be “one of the last movie stars whose name alone draws audiences to theaters,” as he points out The Post. Eg Bullet train released this summer, an action comedy starring the star, grossed a whopping $239.3 million worldwide. A result at the box office that would never have been achieved without his presence, that’s for sure.

The film with Pitt and Sandler

Returning to the new film starring Brad Pitt side by side with his friend Adam Sandler, it is a work that will only be broadcast in streaming, not in cinemas, again according to the sources of the New York Post.

Side Adam Sandler, we talk about one of the most famous actors and comedians of the United States.

He made his debut in the 1990s as an author and then a member of the cast of the television program Saturday Night Livelater becoming a star acclaimed by the general public thanks to successful Hollywood productions.

For two consecutive years he was the third highest-paid actor of the year, according to the magazine Forbesearning $40 million in 2011 and $37 million in 2012. In addition to the countless comedies he has starred in, some of his roles in dramas such as Drunk on love, Reign Over Me, The Meyerowitz Stories and Rough diamonds are considered truly remarkable, acclaimed by both critics and the public.

As for Baumbach, 53, his White noise for Netflix it has not been as successful as hoped for.

The film, based on Don DeLillo’s 1985 novel of the same name, screened at this year’s Venice and New York Film Festivals in hopes of being nominated for an Oscar. But the film starring Adam Driver and Greta Gerwig got mixed reviews.

Awards-wise, Adam Driver has so far been nominated for Best Actor in a Motion Picture Musical or Comedy at the Golden Globes, while at the Critics Choice only one nomination has been obtained for Best Song.

White noiseon Netflix (also visible on Sky Q and via the app on the Now Smart Stick), cost more than 100 million dollars.

Original title White Noisethe film was a costly gamble for Netflix even in pre-production: the novel was originally planned as the basis for a TV show for studio A24 (Everything Everywhere All at Once, Aftersun), who paid $50,000 to option the book (a standard amount for a fairly old work of literature). But Netflix wanted it at all costs, literally at all costs: it bought the option from studio A24 them for 10 million dollars, according to the source of the NYP extension.

Below you can see the video of Brad Pitt and Adam Sandler together during the meeting organized three years ago by the US magazine variety for the series of conversations Actors on Actors, waiting to enjoy them on the same film set.