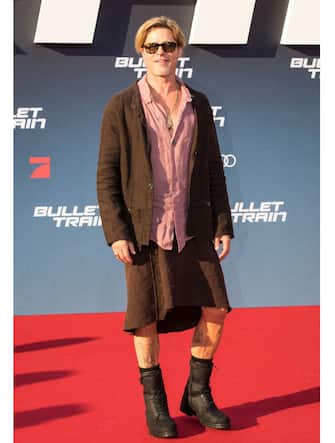 Brad Pitt showed up on the red carpet of Bullet Train, the film directed by David Leitch arriving in Italian cinemas on August 25, with an unexpected look: jacket and skirt in linen. Clearly the skirt (longuette and flared, brown like the blazer) that left everyone speechless. If it’s not a losing bet with his prankster friend George Clooney, it could be the start of the trend towards mainstream male skirts.

WATCH THE VIDEO: Brad Pitt could retire from the cinema

Among the Italian stars most fond of the skirt there is certainly the singer Mahmood. Here he is on 5 February 2022 in Sanremo on the Ariston stage, with a look including a skirt shown on the occasion of the 72nd Sanremo Festival

Berlin, Brad Pitt in a linen skirt and jacket for the premiere of the film Bullet Train. PHOTO

And here is Mahmood wearing the skirt again at the Eurovision 2022 opening ceremony in Turin. The outfit is signed by Willy Chavarria, a queer New York designer

The singer Sangiovanni chose the skirt for the red carpet of the Rome Film Fest 2022. On Instagram the artist wrote: “We are not free to be the people we want to be, we are not free to dress as we please, to love who cabbage it seems to us without being judged. But this thing can be fought “

US rapper and singer Lil Nas X is a huge fan of the skirt. he wears it on and off the stage. Here he is on stage during the Audacy Beach Festival at Fort Lauderdale Beach Park in Fort Lauderdale, Florida in 2021

Holidays in the cities of art: what to wear by copying celebrities

And again Lil Nas X wears a look with a skirt for the event organized by iHeartRadio titled “106.1 KISS FM’s Jingle Ball 2021” at Dickies Arena in November 2021 in Fort Worth, Texas

Summer 2022, fashion wears the colors of the sea. PHOTO

Many designers also let themselves be tempted by the indiscreet charm of the skirt, and not only when they have to design feminine looks. This is the case of Marc Jacobs, who in the photo wears a skirt to attend the Perfect Magazine LFW party in London in February 2022

Although the trend has exploded in recent years in recent months, the designer Marc Jacobs had already cleared the skirt from the exclusivity of the women’s wardrobe back in 2011: here is the fashion designer wearing a look with a skirt in July 2011 in Berlin, on the occasion of the Mercedes-Benz Fashion Week Berlin Spring / Summer 2012

Summer fashion 2022, the most beautiful bikinis of the season. PHOTO

And here’s another designer: the late Alexander McQueen, who committed suicide at the age of forty in 2010. Here we see him four years before his death, together with his dear friend Sara Jessica Parker. They both wear a skirt, he of the Scottish kilt genre. The occasion is that of the famous Metropolitan Museum of Art Costume Institute Benefit Gala. The theme was related to Anglomania, so thematic looks have a why

How to wear a bikini in the city by copying the stars and models?

When in doubt, Jared Leto chooses both: trousers with a skirt above. This is the original look that the singer and actor wore in 2014 in Los Angeles at the iHeartRadio Music Awards at The Shrine Auditorium

Billy Porter is a fan of the skirt mixed with his looks. Here he is in 2020, on February 14 (Valentine’s Day) while in London he participates in the ‘Central Saint Martins’ fashion show event during London Fashion Week. Porter is openly gay and has been married to Adam Smith since 2017

Michael Urie is the American actor who gained fame as Marc St. James in the comedy series of Ugly Betty. Here he is on the red carpet of the Met Gala 2019 with a dress that is half feminine, with a skirt, and half masculine. The theme of that year’s Met Gala was “Camp: Notes on Fashion”. Urie June 2009 Urie called himself “a member of the LGBT community” on his website. In a February 2010 interview with The Advocate he stated that he identified himself as queer, because he never felt wrong when he was with a woman.