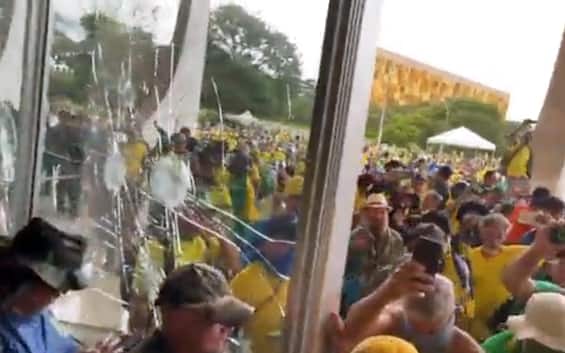 The raid by the former head of state’s ultras recalled the one carried out two years ago on Capitol Hill in Washington by Donald Trump’s supporters and was defined as “vandal and fascist” by the newly elected president Luiz Inacio Lula da Silva.

Meanwhile Bolsonaro has distanced himself from the rebels, arguing that: “Peaceful demonstrations, according to the law, are part of democracy. The looting and invasion of public buildings such as those of today, as well as those practiced by the left in 2013 and in 2017, are illegal.” The former head of state then denied the sender the accusations made against him by Lula, saying: “Throughout my mandate I have always been within the perimeter of the Constitution, respecting and defending the laws, democracy, transparency and our sacred freedom” .

Removed the governor of Brasilia

Following yesterday’s episode, Federal Supreme Court judge Alexandre de Moraes removed the governor of the Brasilia capital district Ibaneis Rocha from his post for ninety days. The reason for the suspension was dictated by the fact that “the violent escalation of criminal acts is a circumstance that can only occur with the consent, and also the effective participation, of the competent authorities for public security and intelligence”, as stated Moraes himself to the Brazilian media. The federal judge accused Rocha of ignoring all the requests to strengthen security made by various authorities, with a “deceptively omissive conduct” in defending a false “free political demonstration in Brasilia” and not considering all the appeals by the authorities to carry out a security plan to prevent protesters from entering the Congress area.

In the meantime, the Brazilian authorities have begun the assessment of the extensive damage to the Presidential Palace, the Congress and the Supreme Court of Brasilia. The area was cordoned off by the authorities, but the Bolsonaristas, many of whom wore the green and gold jerseys of the Brazilian national team, managed to break through the security cordons, causing considerable damage. The damage to many highly valuable paintings in the Parliament was particularly serious.