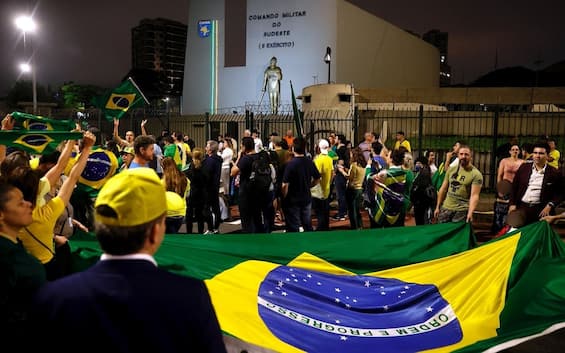 The failure of conservative president Jair Bolsonaro (Pl) to recognize the victory of opponent Luiz Inacio Lula da Silva in the elections in Brazil fuels tension in the country. The most radical supporters of the right-wing leader are organizing on the internet to maintain blockades of roads and highways and to reach the area of ​​the Palaces of Power in Brasilia, where the police have set up an extensive law enforcement service, according to what the site writes Estadao.

On Telegram, these uncompromising fringes are planning to get to the Esplanade de ministerios, and are talking about “armed resistance.” Protesters also encourage a meeting in front of the Army headquarters in the federal capital. A group of supporters of the president stands. already with the Bolsonarist flags in the military sector near the headquarters of the army command.

The elections in Brazil ended with the victory in the ballot of the left-wing leader, Luiz Inácio Lula da Silva (Pt), who was elected president for the third time. Lula narrowly beat the current head of state, Jair Bolsonaro (PI), the first president to fail in his re-election attempt. After the outcome of the elections, Bolsonaro did not recognize the opponent’s victory and closed himself in silence that triggered a spiral of speculation.