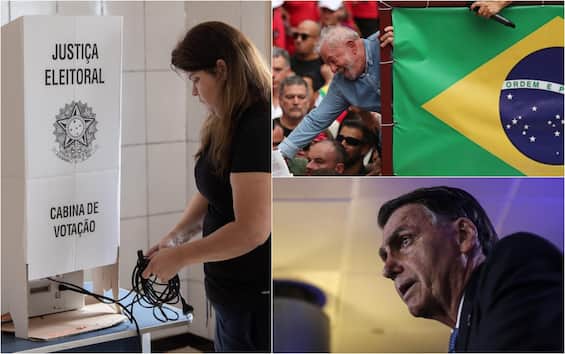 Split Brazil returns to the polls in search of its president, with seats that opened at 8 (12 in Italy). A ballot that promises to be a head to head to the last vote, with a win on the wire. In the latest electoral poll carried out by IPEC, commissioned by Globo, the left-wing leader Luiz Inácio Lula da Silva (Pt) has 50% of the voting intentions, against 43% of the right-wing president, Jair Bolsonaro (Pl). Counting only valid votes, Lula has 54% of the votes against Bolsonaro’s 46%. In both scenarios the result appears stable, with the candidates maintaining the same percentages of the previous survey. According to the survey, 5% of voters reported voting blank or null and 2% did not know or did not respond.

Yesterday Lula closed the electoral campaign along the Paulista avenue. There was also the former president of Uruguay, Josè Pepe Mujica, to accompany him. Shortly before, Mujica had attended a press conference with Lula, in which the left-wing leader pledged, in case of victory, to “bring Brazil back to normal”. A carousel of motorbikes, mainly of gig economy workers who do home deliveries in the city, also paraded along Avenida Paulista, the main thoroughfare of São Paulo, in support of former president Luiz Inácio Lula da Silva. The motorcyclists carried Lula’s flags and crossed the avenue making the L with their hands, honking the horn and accelerating the engine. The so-called ‘motociate’ (motorbike parades) have become famous in recent years qualifying as demonstrations in support of the right-wing president, Jair Bolsonaro (Pl), often on highways, led by the head of state himself.

What did Bolsonaro do

On their last day of the election campaign, the two candidates went to the two key territories of the country, to try to convince the undecided, at least 20 million in the first round. Bolsonaro went to Minas Gerais, a college of 21 million inhabitants, conquered by Lula on the 2nd October session, historically important for the election of the head of state. Together with the president, in Belo Horizonte for a carousel in motorcycles and cars with green-gold insignia, also Nikolas Ferreira, a 26-year-old deputy with a million and a half votes, the most voted in Brazil and ever in the history of the territory in strong industrial vacancy. A region where, despite the support of Governor Romeu Zema for Bolsonaro, according to Quest polls, Lula continues to be in the lead in voting intentions with 45%, against 40% of the president.

Challenge to the last vote

“A game still open” define analysts, who do not feel like ruling out a surprise ending. In the first round the leader of the PT had obtained 48.43% of the votes (57.259.504) against 43.2% of the PL candidate (51.072.345), conquering 14 states, against 13 of Bolsonaro. A failed victory for a gap of about 6 million votes, in a country with over 150 million voters, which could reserve new unknowns for the ballot. If in fact it is clear that the progressive West is pressing for Lula (the New York Times took sides by publishing a video stating that the elections “will define the future of the planet”, and the French newspaper Le Monde hosted a tribune signed by the leader of the PT) the picture that emerges from the South American giant is not so clear.