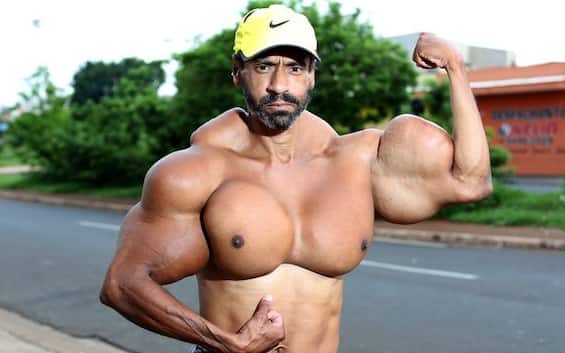 Bodybuilder Valdir Segato was not satisfied with training in the gym. The Brazilian, even going against the opinion of the doctors who had warned him about the possible risks, had started to inject himself into his muscles with a synthetic oil-based substance to swell them as much as possible. A passion for the muscles that has turned into an addiction and which led Segato to death from respiratory crisis.

To get his muscles swollen dramatically, Valdir injected the Synthol: a synthetic blend based on oil, lidocaine and benzyl alcohol. The Brazilian was warned of possible side effects: “The doctors – he told the Daily Mail in 2019 – have repeatedly advised me to stop using Synthol but it is my decision. I do it because I like it”. Among the risks listed by doctors are infections, muscle fibrosis, tumors, brain and muscle problems. In the case of Valdir Segato it was the heart that could not withstand the extreme stress to which the man subjected his body. The cause of death has not yet been confirmed but it was likely a heart attack. A neighbor told the Brazilian newspaper Globo about the bodybuilder’s last moments: “It was around 6 am. He came crawling and knocked on my mother’s window. He knocked several times until she woke up and said ‘ Help me, help me because I’m dying. ” Segato was immediately transported to the nearest hospital in Ribeirao Preto, the town where he lived alone about 300 km from São Paulo, but there was nothing for him to do.