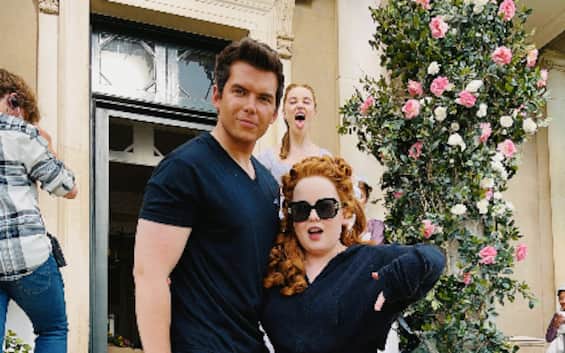 Filming of the third season from Bridgertonthe successful Netflix series (also visible on Sky Q and via the app on Now Smart Stick) which has received great acclaim from the public and critics.

In the past few hours, the Twitter account of the series has shared a photo directly from the set offering a glimpse into the production.

Great expectation for fans of the series. What will happen in the new episodes of Bridgerton? A little while ago the production account posted a photo with Nicola Coughlan And Luke Newtoninterpreters of respectively Penelope Featherington And Colin Bridgerton.

Behind the couple also another protagonist of the series, that is Phoebe Dynevorinterpreter of Daphne Hastings.

The Twitter profile of Bridgerton did not reveal any details about the production but simply wrote: “Qui a lot is certainly happening“.

There are no indiscretions regarding the possible date of distribution of the new episodes of Bridgerton on the streaming platform (also visible on Sky Q and via the app on the Now Smart Stick), there is therefore nothing left to do but wait to be able to learn about all future developments.