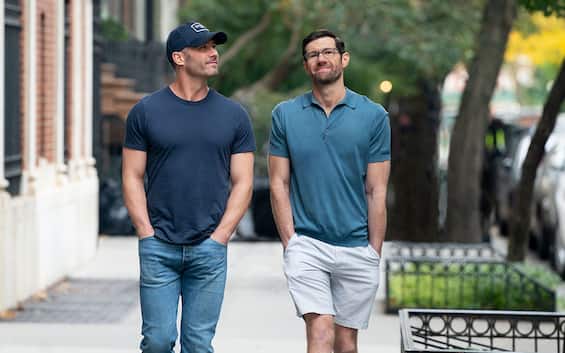 From the fervent comic mind of Billy Eichner (Billy on the Street, The Lion King (2019), Difficult People, American Crime Story 3: Impeachment) and the genius of successful authors such as Nicholas Stoller (Bad Neighbors, Don’t dump me) and Judd Apatow (The King of Staten Island, A girl disaster, The Big Sick – Marriage can be avoided … love cannot), is born Bros, an intelligent, sensual and profound comedy about the pursuit of sex, love and romance with the addition of a little bit of madness. Played by Billy Eichner, the first openly gay man to be co-screenwriter and starring in his own major film, Bros is directed by Nicholas Stoller, who also co-wrote with Eichner. The film is produced by Judd Apatow, Stoller and Joshua Church (co-producer of A girl disaster, Step brothers at 40). The executive production of the film is by Eichner. After being presented at the Rome Film Fest, the feature will arrive in cinemas starting November 3. While waiting, at the top of the article you can see an exclusive clip for the Sky TG24 website.

In almost all of Hollywood history, for a straight actor – specifically a straight male actor – playing a gay role was considered a career bombing. After Tom Hanks won the Oscar® for Philadelphia by 1993, attitudes began to change and, over the years, playing gay characters has become a fast track to professional recognition and awards. Since 1993, over 15 straight men have been nominated or won Academy Awards® for playing gay characters. It has become such a common occurrence that it was parodied by movie star Robert Downey Jr. in Tropic Thundera role for which Downey himself received a nomination.

“For decades, Hollywood has allowed straight actors to play the best-written, most intriguing, most multidimensional and high-profile LGBTQIA + roles that end up winning awards,” says Billy Eichner. “And they use these roles to show people their versatility, their ‘courage’ and their seriousness at work, which is fine. But it never works in the opposite direction ”.

So when Nicholas Stoller, Eichner and producers Judd Apatow and Josh Church started casting for Bros, had impressed this concept well. “The first casting decision was that my love interest would be played by another openly gay actor,” says Eichner. “Everyone, including the firm, has been firmly convinced of this. Then, once I made that decision, I turned to Nick and said, ‘Everyone in the cast should have come out about their non-binary gender identities or their non-straight sexual orientation.’ The film itself was becoming, to some extent, a means of allowing queer people to tell their own stories, and to control our own stories. It was as if we had to use this opportunity to populate the film with openly gay and lesbian actors and actresses, transgender people and other people with non-binary identities who simply hadn’t had this chance before, based solely on who they were in their personal lives. “.

In addition to being the first major romantic comedy starring two gay men, Bros it is also the first film in history with an entirely lgbtqia + main cast. This is reflected not just in the cast selection, but on the screen itself, as a talking point between Eichner’s character, Bobby, and his love interest, Aaron (Luke Macfarlane) during a date early in their relationship. “They go to see a movie called The Treasure Inside which is a great Oscar-winning movie with two straight actors, “says Nicholas Stoller.” And Billy’s character Bobby keeps wondering ‘Why gay actors can never play straight while straight actors can play gay characters winning the Oscars? ‘And so, for that line to work, we needed to make the entire film from a lgbtqia + perspective. So, lgbtqia + characters are played by lgbtqia + actors and actresses; straight characters are played by lgbtqia + actors. actor of the film belongs to this community. And I think he makes it different. “

The casting process for all of those roles proved surprising and challenging. “We auditioned so many wonderful actors,” says Eichner. “What has come out is that there is an enormous amount of talent among the LGBTQ + people that has not been used. We could have picked 30 other actors who were all equally funny and great. It was mind blowing. It wasn’t about getting a message across, but about helping to correct what is currently a profound imbalance in who gets certain opportunities ”.

The first time the entire cast assembled, the impact was more powerful than everyone expected. “We did a script reading and had a blast,” says Apatow. “But the thing I was surprised about was that it was a very emotional read, because a lot of people thought, ‘I’ve never had a part like that. I have never felt represented. Most of the business hasn’t been welcoming to me. ‘ Many of those present deserved visibility. Fortunately, audiences will now be impressed with all these new faces. “

Producer Josh Church was delighted with them. “This was among the most talented cast he has ever seen,” says Church. “Looking at the scenes on the set, there are people we’ve never seen making comic jokes and stories we’ve never heard. For this cast, in particular, the experiences lived by each of them were important and everyone brought their own. That’s why Billy and Nick intentionally wrote a movie with a great ensemble, so we could get everyone involved and say, ‘Share your story.’ “