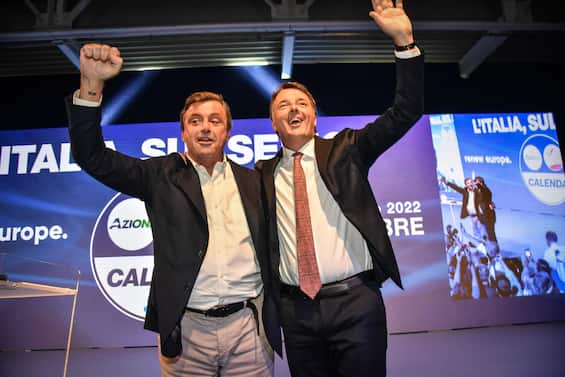 The two leaders at the Super Studio in via Tortona in Milan. The clash with the Democratic Party is ignited. The head of Action: “” That of Letta is a crazy strategy, a ‘national liberation committee’ without the 5 Stars but with their doubles, the country should not be divided by hammering. “Then he says:” We will grow and change the scenery political “. The secretary of Italia Viva:” Europe needs our commitment “

With a hug between Carlo Calenda and Matteo Renzi, followed by the roar of applause from the numerous present, the curtain rises on the election campaign of the Third Pole in Milan, “the heart of an enlightened bourgeoisie that should not be afraid to call itself such”, says Calenda , because in Italy “we need a ruling class”. Over 5 thousand people attend the event. The Super Studio in via Tortona is sold out and a lot of people remain outside, between anger and shouts, until the intervention of the police. Enthusiastic tones, lights and blue carpets are the setting for the event, which officially kicks off with the notes of the Italian anthem and all those present standing (TOWARDS THE ELECTIONS, FOLLOW THE LIVE UPDATES).

Renzi: “We are the only useful vote”. Calenda: “In the Senate we will stop the right”

“We are the only useful vote for Italy to return to growth”, Renzi immediately says from the stage. “We must save the country – he claims -: on the one hand there is a sovereign right among the worst in Europe, on the other a populist left”. And above all “no one is innocent” as Mariastella Gelmini will also say: “On the right, on the left and in the M5s, there are those who sent Draghi home, while we supported him”, underlines the number one of Italia Viva. Carlo Calenda also returns to the useful vote, who speaks from the stage for over half an hour: this is not a reply to the Democratic Party, he explains, “it is a fact, there are four coalitions, there is actually no useful vote that does not both on the plurinominal, in particular in the Senate. And that’s where we will stop the right, but we will not stop it by saying ‘let’s stop the right’ but by telling the Italians what we want to do. It is the only useful vote there is “. The words of the leader of Action are addressed “to all those who are tired of the ‘politics against’: you will not find us against anyone”.

The leader of Action a Letta: “Remember what story you come from”

Calenda also addressed the secretary of the Pd Enrico Letta, accused of not having tiger eyes but squinting: “Remember what story you come from, ‘Berlinguer-Almirante’ is not so schematic. There was something in between in Italy and it is very important”. There is also talk of the relationship between the ‘heads’ of the two-headed pole. Renzi covers himself with humility: “Generosity is not heroism, it is the ability to recognize oneself as part of a team. For this reason I am the first to be happy that Carlo and I by his side are leading this game, having taken a step back”. Calenda, to those who ask him if he excludes friction in the future, replies: “In life I have learned not to exclude anything”, but “it is not important what we say to each other or how we work together, because we have done it and also well. it is important to represent the same political area with consistency: today we are the only political group in Europe that is within the same group “.

Calenda: “Third pole will grow before and after the elections”

Calenda is optimistic about the future of his party: “There is no doubt that (the Third Pole ed.) Is something that will grow, before and after the elections and will change the Italian political scenario – he assures – We started in Rome at 5 percent and we have finished at 20 per cent “and” we have surpassed Forza Italia in the polls, let’s try to give ourselves a move to get where we need to go “. The leaders of the new movement call themselves neither right nor left but, unlike the Five Stars, “we know what we are, much more specifically right or left: popular, liberal and reformist. They are great European political cultures that have When Draghi speaks of a republican spirit, this is what we believe is necessary: ​​The minimum wage of 9 euros, to be a regasification plant, to help Ukraine and to be Atlanticist and pro-European, to participate among the great European countries in building the ‘Europe”.