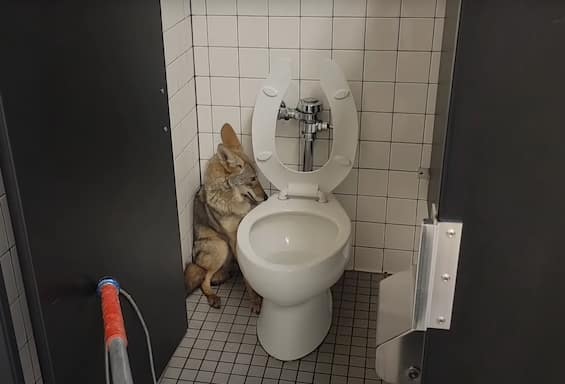 Some Californian students have risked doing a bad encounter in the corridors on a Monday morning. Riversideeighty kilometers east of Los Angeles, a guardian from Jurupa Unified’s Mission Middle School found a coyote in the school yard and immediately alerted the competent authorities.

As officers from Riverside County Animal Services made their way to the institute, the frightened animal took refuge in the bathrooms.

A happy ending for Wile E.

It took a short time for the staff, alarmed but also moved by the frightened pet in the corner of the toilet, to find a name for him: “Wile E.” in honor of the famous coyote in the animated series “The Looney Tunes” by Worner Bros.

The coyote had been seen several times around the institute but no one thought it would get that close.

When help arrived, it was Officer Will Luna who stepped in. Wile E., thought to be around nine months old, was captured and soon released in a rural area away from school.

Beware of the coyote

The California Department of Fish and Wildlife has calculated that on the Californian territory there is a population that fluctuates between the 250,000 and 750,000 coyotes. They are present in almost the entire state, although the number falls in urban areas. Coexistence with humans can lead to inconvenience. These animals often cause damage to crops and attack livestock. In the cities there are several attacks on domestic dogs and cats. Authorities recommend that citizens put the trash inside and avoid leaving food and water in the yard. It is not uncommon for these animals to roam the city streets once the sun has set.