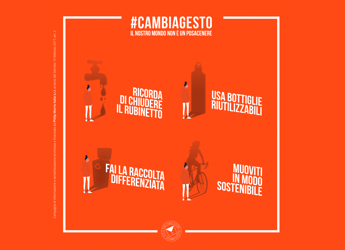 The first edition on November 27th

It is celebrated tomorrow Saturday 27 November the Change Gesture Day, the day you want support and strengthen the sense of individual responsibility for the environment, stimulating citizens to change their habits and become aware of their behavior, starting from the environmental impact of cigarette butts dispersed in the environment.

Il CambiaGestoDay is inspired by the awareness campaign against the dispersion of cigarette butts in the environment, #CambiaGesto. Born in the summer of 2019, the campaign has touched the entire national territory in recent years, making stops in over 40 Italian cities including Rome, Bari, Bologna, Milan, Naples, Palermo, Turin and Florence. Thanks to the support of local institutions, campaign partners, 700 tobacconists and over 3000 volunteers throughout Italy, more than 160 kg of cigarette butts were collected and dispersed in the environment and distributed over 270 thousand cigarette holders.

In 2021, thanks to the partnership with LifeGate, the #CambiaGesto campaign involved joining the LifeGate PlasticLess project with the activation of three ‘Seabin’ in the cities of Fiumicino, Venice and Taranto, devices capable of filtering up to 25,000 liters of water per hour and capturing approximately 1,500 kg of floating waste in a year, including plastics and cigarette butts. A result possible thanks to the collaboration of all those who took part in the #CambiaGesto challenge. “Thanks to the collaboration of companies, tobacconists, institutions, the third sector and thousands of volunteers, the CambiaGesto campaign has contributed in recent years to counteract the phenomenon of cigarette littering throughout Italy”, he commented. Michele Samoggia, Head of Communications and Sustainability of Philip Morris Italy.

“With CambiaGesto Day we want to set a symbolic day to become aware of enormous difference that each of us can make, through a series of small daily gestures, to safeguard our Planet “, he adds. Not only that. It is published for the first time on the occasion of CambiaGesto Day,”The Handbook of Good Habits‘that it collects 21 good practices for advising, informing and supporting citizens towards more virtuous behavior towards the environment such as the responsible use of water, attention to the consumption of electricity or the reduction in the consumption of plastics.

The #CambiaGesto tour then continues in the cities of Fiumicino, Venice and Taranto with awareness actions carried out by the partner associations Retake, a non-profit movement active in the field of environmental protection, and Plastic Free, which has been committed for years to involve citizens on the issues of plastic pollution. The stages of November 27: Fiumicino – Via della Torre Clementina 22; Venice – Rialto Bridge, Riva del vin side; Taranto – Via d’Aquino at the corner of Piazza Garibaldi.

Promoted and financed by Philip Morris Italy, the #CambiaGesto campaign has obtained the patronage of the Ministry of Ecological Transition and is carried out with the support of many volunteers from Retake and Plastic Free, companies that have always been involved in actions to combat the phenomena of littering and environmental degradation.