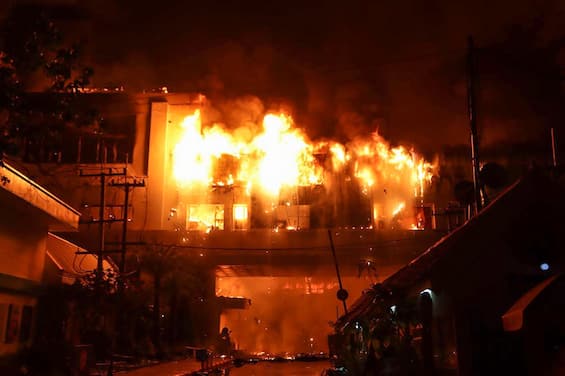 huge fire that engulfed a casino in Poipet, a city in Cambodia on the border with Thailand. According to reports from police sources, the fire affected the “Grand Diamond City Hotel and Casino”, causing “at least twelve dead and one hundred injured”. Images posted on social media show the huge building engulfed in flames. The wounded were transported to hospitals in the neighboring Thai province of Sa Kaeo, a source at the Thai Foreign Ministry said. “The authorities – explained the source – are trying to control the fire also with the help of fire engines arriving from Thailand”.

There were also many foreigners in the facility

The fire allegedly broke out on the first floor of the casino hotel and quickly spread to the other floors due to the carpet with which the floors of the building are covered. According to police reports, about 400 people work at the Grand Diamond City. There were also foreign nationals inside the building at the time of the fire. There are many casinos that have sprung up on the border with Thailand and are particularly popular with Thai customers who cannot play in their own country due to restrictions.

In recent months, several fires have broken out in nightclubs, very often due to the main safety standards not being respected. Last August, a fire at a nightclub near tourist Pattaya, Thailand, claimed 26 lives, mostly young people attending a party. A month later, 32 people died when flames broke out in a karaoke bar on the outskirts of Hô Chi Minh, Vietnam.