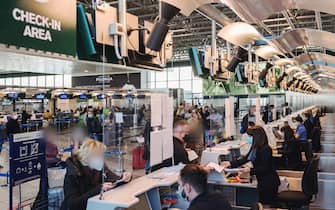 Large companies and strategic airports that preventively reduce the number of departures. Flights canceled within hours of boarding. Mistakes at the airport with long queues at check in. The first European strike planned to ask for better contractual conditions from the low cost giant Ryanair. In the coming weeks, the start of summer holidays could turn into a nightmare journey for many passengers in Europe.

After two disastrous years for air transport, due to the necessary restrictions related to the Covid pandemic which led to a drastic reduction in air traffic, sending the sector into crisis, the reduction of infections and the lifting of restrictions in almost all countries brought people back to travel. Only a few destinations have reached pre-pandemic traffic levels but the trend appears to be consolidating.

Except that the air transport market, tested by the losses of the last two years, is currently struggling to keep up with demand, squeezed between a shortage of personnel and an increase in operating costs, starting with that of fuel.

Summer 2022, 20 travel books to pack and read on vacation

So in recent days Lufthansa, the German giant, announced that it will cut about 900 flights in July for the weekend to and from the hubs of Munich and Frankfurt, due to the shortage of staff.

This is 5% of the seats normally available for booking on weekends. The company has admitted that it is not yet able to meet all the demand. (In the photo a protest by Lufthansa employees in recent months)

It is no better for Swiss Air, which has announced cuts: in July and August the number of flights between Berlin and Zurich will be reduced from 48 to 44 per week. Also eliminated one flight a week between Zurich and San Francisco.

Same policy for Brusselsair which cut 148 flights between June and July.

Similar situation in London’s Gatwick airport (in the photo the queues during a strike in June)where the number of daily flights will be reduced to 825 in July and 850 in August, compared to 900 in previous years, due to staff shortages.

Gatwick Airport (from above in the photo) specifies that it has made the decision to help passengers “experience a more reliable and better standard of service”.

Meanwhile, in the wake of the 6-day mobilization called by the Spanish unions in Ryanair and Air Malta, this week the workers’ organizations of Italy, France, Portugal and Belgium joined together for a first 24-hour collective mobilization on Saturday 25 June.

A move that met with the harsh verbal reaction of the company’s CEO, Michael O’Leary, who branded the initiative as the work of “Mickey Mouse unions”.