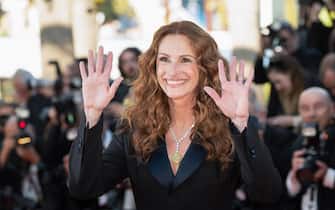 Julia Roberts lit up the red carpet of the Cannes Film Festival with her unmistakable smile. The Hollywood diva this year is the godmother of the Trophée Chopard. Among her tasks, the awarding of an award to two emerging talents in the world of acting

Julia Roberts enchanted those present by wearing a very different look from those usually seen on the prestigious red carpet. For her, a long-tailed tailcoat Louis Vuitton by Nicolas Ghesquière, sandals with René Caovilla thin straps and Chopard diamonds. The image of him is curated by celebrity stylist Elizabeth Stewart

It is not the first time that Julia Roberts shows up on the occasions that matter in pants. Her style is masculine-inspired, very elegant and sexy. Her jacket, worn alone, in line with the latest trends for her and for him, leaves the precious Chopard collier in the foreground

Chopard, official partner of the Cannes Film Festival, offers the most fabulous pieces of its high jewelery collections to the stars passing through the Croisette

Julia Roberts, born in 1967, has never abandoned her style, simple and refined. For the event she adopted a voluminous hairstyle with soft curls by Serge Normant. The make-up, on the other hand, is by Genevieve Herr

Roberts was accompanied on the Cannes red carpet by Caroline Scheufele, co-president and artistic director of Chopard, who said she was very happy to host the actress as godmother of the award, a role played in previous editions by stars such as Cate Blanchett, Charlize Theron and Gwyneth Paltrow

The Trophée Chopard awards ceremony took place in Cannes during a gala dinner: Roberts is naturally the guest of honor

Julia Roberts appeared before photographers on the evening red carpet, before the cast of Armageddon Time by James Gray, presented out of competition

Although she is in Cannes for a side event, Julia Roberts remains one of the most photographed stars of the event that sees film stars from all over the world present again after two editions carried out in reduced form

The actress will be back on the big screen in the fall with the romantic Ticket to paradise. Alongside him, in the film, his friend George Clooney