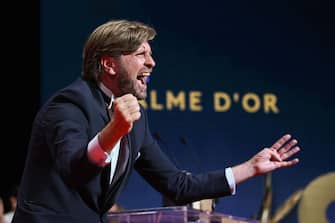 WATCH THE VIDEO: Paolo Cognetti tells “The eight mountains” from the book to the film

Cannes, Palme d’Or awarded to the “Triangle of Sadness”. Jury Prize to “The eight mountains”

The embrace between Ruben Östlund, whose film “Triangle of Sadness” was awarded the Palme d’Or, and the president of the jury Vincent Lindon

Watch the special on the Cannes Film Festival

Grand Prix ex aequo to “Close” by Lukas Dhont and “Stars at Noon” by Claire Denis. Here is Lukas Dhont, director of “Close”, together with Eden Dambrine and Javier Bardem

Cannes 2022, the red carpet: the best looks and moments of the awards ceremony

Cannes, Andie MacDowell and Helen Mirren, a red carpet at a dance pace

The special prize of the 75th edition of the Festival went to “Tori et Lokita” by Jean-Pierre and Luc Dardenne. Standing ovation for the two Belgian directors at the time of the award ceremony

Cannes Film Festival 2022, being mothers and migrants in Léonor Serraille’s “Mother and Son”

Jury Prize ex aequo to “The eight mountains” by Charlotte Vandermeersch and Felix Van Groeningen and “Eo” by Jerzy Skolimowski. Here are Charlotte Vandermeersch and Felix Van Groeningen awarded for “The eight mountains”, starring Alessandro Borghi and Luca Marinelli (based on the novel of the same name by Paolo Cognetti, winner of the 2017 Strega Prize)

amfAR Gala Cannes 2022, all the looks of the stars

Kaia Gerber and Austin Butler, the kiss on the red carpet of the Cannes Film Festival 2022. PHOTO