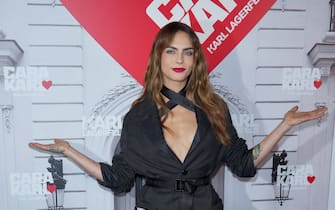 Crowd and lots of flashes for Cara Delevingne, star of the capsule presentation event in Paris Dear Loves Carldeveloped with the brand of Karl Lagerfeld, a designer with whom the model and actress had a special relationship

Karl Lagerfeld’s muse has appeared in great shape in the fashion capital where Fashion Week is underway. In September her admirers were very impressed by some photos of her in a confused state at the airport in Los Angeles

Cara Delevingne continues to worry friends and fans. Closed in the house for days

The photos of Delevingne, unkempt, without shoes and with a dull look, had not a little alarmed her fans, worried about the mental health of the model, in evident state of physical and mental stress

Cara Delevingne, famous for her beauty and her multifaceted talent that led her to success in both the fashion and acting world, is also known for her exuberance and for being a lover of nightlife

Cara Delevingne has psoriasis and she doesn’t hide it: the look of the Met Gala 2022

Recently, some friends of the 30-year-old have expressed concern about her physical condition. In particular, Margot Robbie said she was shaken after meeting her and some tabloids, such as the The Sundiscussed the possibility for the top to start a rehab path

Only murders in the building 2, Cara Delevingne in the cast

The appearance of Delevingne in Paris for the event Dear Loves Carl however, it leaves no room for doubt: the model and fashion designer seems to have overcome her difficult weeks

With loose hair and bright make-up, crazy red lipstick and eye-catching eyes, Cara Delevingne has long indulged in photographers by giving them her proverbial grimaces

Delevingne worked extensively on the capsule Dear Loves Carl composed of clothing and accessories with a young, urban and unisex cut, a compendium of the style of the model adored by Karl Lagerfeld

The garments, sustainable and combinable with each other, are available in the stores and e-commerce of the Lagerfeld brand and in various pop-ups around the world.

For the prestigious presentation, the model wore a total black, perfect for the Parisian night. Cuissardes and blazer dress with gritty details on the front: straps (with Karl Lagerfeld logo) with a sporty attitude

It is not clear if, in addition to this presentation, Delevingne will be on the catwalk for some of the shows scheduled in Paris in the coming days. Fashion Week will go on until 4th October

In addition to her commitments in the fashion world, Cara Delevingne is active in the film and television fields. Fans of her were able to admire her in the role of Alice in the acclaimed show Only Murders in the Building 2

Another photo of Cara Delevingne with her hands in her pockets, like a real bad girl

Here she is posing with Pier Paolo Righi, CEO of Karl Lagerfeld

Here, with the American model Alton Mason who, like her, walked the Chanel catwalk