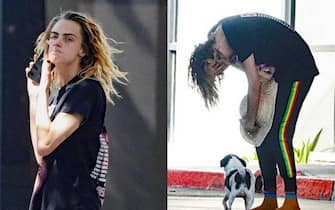 Cara Delevigne alerts her fans. In fact, the London supermodel and actress was filmed in a confused and visibly altered state. In the video that went viral, the girl is at the Van Nuys airport in Los Angeles, she has unkempt hair, she barely stands up, smokes and drops the phone several times to the ground.

Cara Delevigne was recently seen smoking a suspicious pipe at the Burning Man Festival, and some sources close to the model said she “hasn’t eaten or washed for days”

In August, and precisely on the 27th, Cara Delevigne just turned 30. Time that she has lived intensely, changing the rules of the game on the catwalk thanks to her thick eyebrows, apparently a defect transformed into a very powerful weapon. That’s who the British supermodel is

Cara Delevingne talks about herself

Born in London, Cara Delevingne has had a family of the English upper class behind her and can also boast noble relationships. She has two sisters, Poppy (also a model) and Chloe

She has been showing since she was 17, but established herself as a model on the most famous runways in 2009, working for Burberry, Dolce & Gabbana and Jason Wu, despite her stature. In fact, she is only 1.73 centimeters tall, which makes her one of the shortest supermodels around (in the photo of her, with Kate Moss to whom she has often been compared)

Cara Delevingne is the star of the Magnum X Moschino party

Her intense gaze framed by thick black eyebrows, which have become her trademark, makes her famous.

Cara Delevingne, from the catwalk to the big screen

Cara Delevingne is one of the highest paid models in the world. She herself stated that she has earned about 4.3 million euros a year, which is equivalent to about 13 thousand euros a day

Cara Delevingne also made it into the world of cinema. Her first appearance was in 2012 in “Anna Karenina”. With the role of her in “The face of an angel”, a story dedicated to the murder of Meredith Kercher in Perugia (2014), the actress wins the nomination for best newcomer at the BRIT Awards

Valerian, a journey into a disturbing future with Luc Besson

But the films that made her famous on the big screen are “Suicide Squad” and “Valerian and the city of a thousand planets” by Luc Besson (pictured, with the actress and the cast). During her foray into the world of cinema she also suffered harvey from Harvey Weinstein

Passionate about music, she plays the drums. In August 2013 she made a cover of the song “Sonnentanz (Sun Don’t Shine)” by Klangkarussel, together with singer Will Heard

The next James Bond? Cara Delavingne vs Daniel Craig

Cara Delevingne has always declared herself openly bisexual. Her latest partner was Paris Jackson, daughter of singer Michael, with whom she broke up in June. Among her loves also the singer St. Vincent

Cara Delevingne and the others: the top models landed at the cinema

He called his sexuality “liquid”. As she said in an interview: “As a child I used the word gay with a negative meaning. All my friends did. […] If people want to say I’m gay, that’s fine. But we are all liquid. We grow, we change “

Cara Delevingne in Italy, the photo on instagram confirms it

The latest news even gives them as married. This was reported by The Sun magazine, which also reported some details on the ceremony

Cara Delevingne and Ashley Benson, wedding in Las Vegas? Rumors about a ceremony

But E! News denied the bombshell, reporting only a “friendship ceremony” held last summer, a few weeks after the first meeting. “They are not legally married,” points out the magazine

He is the human detective Rycroft Philostrate and she is the fairy Vignette Stonemoss: the two fall in love. In the background, a Victorian-fantasy world

Cara Delevingne, the girl with a thousand looks