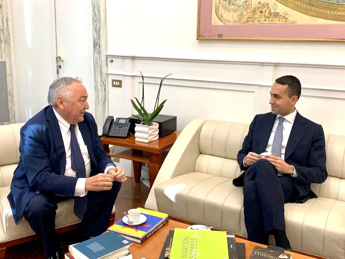 “I adhere with conviction to ‘Together for the future’ because I consider it a serious political project and a liberal space in which all those civil battles that I had shared and embraced four years ago, accepting Luigi Di Maio’s invitation to assuming a direct commitment to the 5Stelle Movement of the time and running for deputy “. With these words Emilio Carelli announces his adhesion to the new political group born from the split into the M5S.” In February 2021 I said goodbye to that Movement that in my opinion had lost its soul and its identity. Today for me it is a return to that government plan of Italy that collected almost 11 million votes from Italians who wanted, and I believe still want, to see a new country, free, open to everyone’s contribution and ideas to solve concrete problems. people’s newspapers, not to witness ideological fights, steeped in useless hatred “, he recalls.


“We have difficult years ahead of us, important challenges that we cannot lose. With the pandemic still underway, a war in the heart of Europe and the use of funds from the PNRR with projects for the modernization of Italy to be carried out in a serious and rigorous, the policy must deal with families, young people and Italian companies that have enormous difficulties due to the rise in the prices of energy and raw materials. At the same time, it must manage with commitment the ecological transition to protect the environment. context the stability of the Government is an indispensable compass so that it is not an end-in-itself conflict that causes one to lose orientation and the right direction of travel. This is why – continues Carelli – I appreciated Luigi Di Maio’s distance from the propagandism and radicalization of the Movement , which, in order to pursue the latest poll, risked and is likely to question the Draghi government and a profitable stability p er the country “.

“We must respond to hate campaigns with moderation, reflection and reconstruction projects in Italy, a country that must remain firmly anchored to the Atlantic Alliance and the European Union. With the principle of inclusion, open to anyone’s contribution wants to commit itself seriously. This is the political space in which very soon I am sure all the political forces and all the moderates and reformists who care not about the next elections but the future of the next generations will meet and collaborate. Among these I hope there will be Luigi Brugnaro, excellent mayor and quality politician, with whom I traveled a stretch of road together, a road that today requires new paths and new landing places “, concludes Carelli.