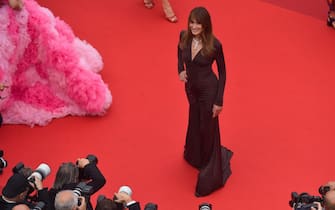 Carla Bruni she was one of the most photographed guests on the red carpet that preceded the preview of the film Les Amandiersdirected by her sister Valeria Bruni Tedeschi, in competition at the Cannes Film Festival 2022. The singer-songwriter enchanted those present with an unprecedented look in warm tones from the French brand Saint Laurent

WATCH THE VIDEO: Cannes 2022, everything you need to know

Carla Bruni chose a long-sleeved dress in light lycra with a V-neck and front drapes for the premier of the film. The dress is part of the Ready to Wear Fall Winter 2022 collection of the brand designed by Anthony Vaccarello

Carla Bruni exhibits the Bulgari high jewelery ring and necklace for photographers. Even in her other appearances at the Cannes Film Festival, her looks were enriched by the light of the brand’s diamonds

Cannes 2022, the most beautiful jewels sported by celebs on the red carpet

Carla Bruni then joined the other guests of the film. Here she is standing next to Bernard Nissile, Marisa Borini and Isabelle Renauld before entering the theater for the film Les Amandiers

Cannes Film Festival 2022: all the films in competition this year. PHOTO

In the meantime, Carla Bruni enjoyed taking some photos of the red carpet herself

Sharon Stone in Cannes on the red carpet with a Dolce & Gabbana dress. PHOTO

After the film, Carla Bruni is expected to attend the evening dedicated to Kering Woman In Motion, the awards promoted by the Kering group for women who have distinguished themselves with their activity in the film industry. For the event, the singer-songwriter opted for the elegance of black

Cannes 2022, the red carpet and the opening ceremony

The look, very simple and effective, is still Saint Laurent, a long dress with very thin straps with a draped pattern on the front. The Bulgari collier has been re-proposed

Alongside the supermodel comes Nicolas Sarkozy. The two are both guests of the gala evening organized in Cannes