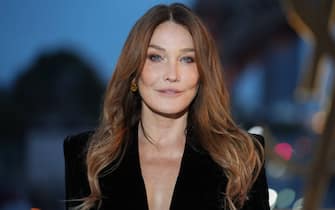 Carla Bruni, born in Turin on December 23, 1967, will be fifty-five in 2022. With her activity as a top model at the top of world fashion, her career in music and her political commitment alongside her husband Nicolas Sarkozy, she is one of the best-known women in the world and a point of reference of her generation

Carla Bruni has become internationally known thanks to her decades of modeling activity. Since the end of the eighties, Bruni has walked the catwalk of the most prestigious brands in the world, becoming the protagonist of numerous advertising campaigns. Here she is in the 1989-90 season

Carla Bruni took on top model status in just a few seasons and together with colleagues active in her own years, including Claudia Schiffer, Naomi Campbell, Cindy Crawford, Linda Evangelista and Helena Christensen, contributed to a profound transformation of the world of fashion between the 1990s and the early 2000s. In this 1996 photo she poses after a Yves Saint Laurent fashion show

From Carla Bruni to Kate Moss: the super models of the 80s and 90s. PHOTO

In 2002 it was published Quelqu’un m’a dit, first studio album by Carla Bruni who had made her debut in the world of music as a singer-songwriter a few seasons earlier. The album is sung almost entirely in the French language. Bruni, born in Italy, has moved to France since childhood

Carla Bruni, whose full name is Carla Gilberta Bruni Tedeschi, is the daughter of the pianist Marisa Borini and was adopted by the industrialist and composer Alberto Bruni Tedeschi. In this photo, the 55-year-old poses with her mother and her sister, the acclaimed actress Valeria Bruni Tedeschi, in a 2009 shot

WATCH THE VIDEO: The best films of Valeria Bruni Tedeschi

The end of the 2000s is characterized by the beginning of the love story between the former model and Nicolas Sarkozy who in 2007 was elected President of the French Republic. In 2008 the couple, very followed by the media, got married and the marriage was celebrated at the Elysée, in civil form, on 2 February. Giulia was born in 2011

Carla Bruni becomes the French Première dame playing her role alongside her husband during two presidential terms until 2012. In this 2011 photo, the presidential couple welcomes the world’s top leaders at the G8 hosted by France

Carla Bruni on the red carpet of the Cannes Film Festival 2022. PHOTO

In this 2012 photo, Carla Bruni smiles at the cameras as she leaves the Elysée with her husband after Francoise Hollande’s victory in the presidential election

Carla Bruni sings at the wedding of Marco Verratti and Jessica Aidi. VIDEO

After the long political parenthesis, Bruni has resumed her previous activities and, in addition to music, has begun to walk the catwalk for exceptional events like many of her supermodel colleagues. Here on the catwalk for Tod’s at Milan Fashion Week last September

Milan Fashion Week 2022: Naomi Campbell and Carla Bruni on the catwalk for Tod’s

Among the most sensational catwalk appearances of recent years, the one for Versace in the 2017 season certainly deserves a special place. For the presentation of the Spring/Summer 2018 collection Donatella Versace brought together Carla Bruni, Claudia Schiffer, Naomi Campbell, Cindy Crawford and Helena Christensen in the same fashion show, arousing the enthusiasm of fans and insiders

Whenever Carla Bruni appears on the runway, whether as a model or as a guest, she is always among the most photographed. Here she is at the Saint Laurent show with her friend and her colleague Eva Herzigova, posing in front of the Eiffel Tower

Same clamor for his appearances on the most glamorous red carpets in the world. Here it is at the Cannes Film Festival 2022

In the same edition Carla Bruni participated in various events. With her, Nicolas Sarkozy. The two are inseparable

Parallel to her commitments in the field of fashion and entertainment, Carla Bruni continues to carry out her activity as a singer and musician. To date she has released six studio albums, one compilation album and one live album

One last shot of Carla Bruni, guest of a gala evening in Venice last September