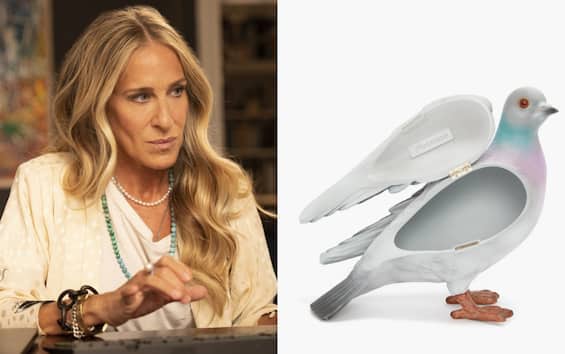 The pigeon hunt is officially open: do not be fooled, we are absolutely not announcing (nor even exhorting) to start a real animal hunt. We refer to the pigeon which in the last few hours has become the latest fashion trend. A photo from the set of the second season of the sequel to Sex and the Cityor And Just Like That 2shows a strange pigeon next to the shoes worn by Sarah Jessica Parker.
The mystery of the pigeon quickly made the rounds of the web, where many fashion experts managed to dispel the doubts of those who interpreted that object in a very imaginative way: it is “simply” (not so simply) a bag.
It is very eloquently called Pigeon Clutch: it is the already legendary clutch by JW Anderson that opens on the wing of the bird (and which costs around 870 dollars).

This accessory immediately became the cult object after being unveiled during the JW Anderson Fall-Winter 2023 Men’s collection runway show. And if it had already made its way into the hearts of fashion-addicts then, now we can speak of a real boom.
Now the fame of this zoomorphic clutch (born for him, not for woman) has grown dramatically, thanks to the most loved show by fashion lovers: Sex and the City first, and its sequel And Just Like That now. Ever since Sarah Jessica Parker showed this bag in a shared shot from the set, everyone wants the Pigeon Clutch.

If you haven’t seen it yet, you will find at the bottom of this article the shot from the set of And Just Like That. You will see that even your eyes, like everyone’s, will be inexorably attracted not so much by the shoes that Parker-Bradshaw wears (already flashy in themselves): it is the pigeon that hypnotizes.

If the Pigeon Clutch had already become a must with the first appearance on the catwalk and if having seen it in an image from the set of And Just Like That made it a cult, let alone when we will probably see the bag in the television series… As soon as the episode in question airs, that pigeon will soon be on the verge of extinction, recording sold out in no time at all. Which, however, seems to be already doing widely …

“Since the very first episodes of the TV series Sex And The Citythat nineties, we understood that the protagonist Carrie Bradshaw, aka Sarah Jessica Parker, would have made people talk about herself also through the choice of her bags “writes the fashion journalist Alice Abbiadati on Vanity Fair. But it must be admitted that we never would have thought of seeing Carrie with such a particular, fun and ultra-contemporary accessory, as Abbiadati herself notes.
In fact, we recall that the iconic character of the series (as well as his interpreter, Parker herself) has accustomed us to It-bags such as the Baguette by Fendi and the Saddle Bag by Dior, without ever entering such a funny and shocking terrain, let’s say.

The team of stylists of the television series, led by Molly Rogers and Danny Santiago, opted for a suit from the Converted Closet brand, for the aforementioned “pigeon-like” clutch and also for a Baguette anklet by Fendi.

Crowning it all is the sexy detail of the gladiator sandals vintage by Dior, old friends of Carrie. And by old we don’t just mean their being vintage: we remember in fact that these shoes were shown in the first S film.ex and the City, as part of the look composed of the green floral dress and the bag in the shape of the Eiffel Tower. We had seen them at his feet in a very important scene, the one in which he searches with Mr. Big for the most suitable New York apartment for them. And in any case, whenever there is a very significant scene, especially linked to Carrie’s love life, a bag with a very particular shape appears, like the one that reproduces the Eiffel Tower. Here pigeon hatches us …

The interpretation of Vanity Fair: that the pigeon is a sign?

A bit like we said before – that is, in every key moment of the series a bag with a very strange shape peeps out – it should be noted how in a recent article appeared on Vanity Fair – signed by the aforementioned journalist specializing in fashion and beauty, Alice Abbiadati – a captivating interpretation of the pigeon-shaped bag is given.

“In the second season of Sex and the Citythe character played by Chris Noth (Mr. Big, ed) gave Carrie a very precious clutch, studded with white and black crystals, in the shape of a swan, by the well-known bag designer Judith Leiber. The swan bag, little appreciated by Carrie Bradshaw and nicknamed a big goose expensive to carry on her arm, however, prompted her to make a striking gesture: to tell Mr. Big for the first time that she loved him. From that moment, for fans of the series, that clutch bag has become a real statement, precisely because of the association with the journalist’s love for the New York scion “, reads Vanity Fair.

“And now a pigeon comes out. That the now single Carrie Bradshaw has found a new love and this It-bag is a subliminal message to tell fans about her? ” continues Abbiadati.

If so, it could perhaps start a wonderful Beatles-style game at the time of PID (an acronym for Paul Is Dead, that urban legend put into circulation by the Fab Four themselves to make their fans understand that in reality Paul McCartney was dead in a motorcycle accident and had been replaced with a double at the behest of the record label.Lots of clues hidden in the song lyrics, in the cover photos and in the band’s own interviews suggested that this was not just an urban legend. In reality, however, it was: it seems that the brilliant mind behind this exceptional marketing campaign was John Lennon himself, who found a way to revive the Beatles in a period when they were no longer at the top of the charts with this hunt for clues scattered. on the band’s records, to find out if Paul really was him or not. With that move, record shops were stormed by hordes of geeks music and even the thriller in psychedelic sauce).

Without taking anything away from Sarah Jessica Parker and her former Fab Four (which today are only Fab Three, since Samanta has given up) it will be hard to compete with the PID and with that genius of John Lennon. But never say never …
But one thing is certain: “In And Just Like That
Carrie’s closet just got even more experimental. And we already like this very much ”, they add on Vanity Fair.

And Just Like That turns everything it touches into gold

Even the jewels see in the show led by Parker a truly incredible media soundbox.
For example, the Opal Rope necklace of the New York brand Fry Powers was spotted on the interpreter of Carrie Bradshaw on the set (and will therefore certainly flow into the final assembly of the show) with the result that that jewel has already registered a resounding success.

Carrie Bradshaw is therefore a “Queen Midas”, capable of turning everything into gold, even necklaces that are already gold (14 karat, in the case of Fry Powers’ Opal Rope).

Below you can see the first photo on the set of And Just Like That shared by Sara Jessica Parker on her official Instagram profile, the one with the pigeon-shaped clutch.